There's no doubting that John Carney is an audience favourite at Sundance. His directorial debut Once took home the festival's Audience Award in 2007 - before going on to more critical acclaim and an Oscar for Best Original Song - and his latest retro school musical Sing Street had an early morning 1200-strong Eccles Theatre crowd literally dancing in the aisles along to the credits.

Certainly those who grew up in the 70s and 80s will find much to enjoy in his nostalgic 1985-set drama, with Carney's first-love will they/won't they romance playing out like a feature episode of school soap Grange Hill against a backdrop of terrific music pastiche, which emphasises some of the sillier, moody elements of 80s pop while celebrating what was best about them. A sort of classroom Commitments that finds charm in naivety. The big question is whether younger audiences less familiar with the original music by Spandau Ballet, Duran Duran and the like will find the same enticements - particularly as there are no big names in the younger cast.

Perhaps, I ought to say, no big names yet, because Ferdia Walsh-Peelo and up-and-coming actress Lucy Boynton could well establish themselves courtesy of their roles here. Walsh-Peelo is perfect as 14-year-old Conor, not only because he has a terrific voice, but also because he is only 16 now, so is able to bring a childlike vulnerability to a character on the verge of adulthood. The film is set against the economic woes of mid-80s Ireland, when many people quit the country in search of a better life in London. Conor's family aren't immune to the downturn and he becomes a fish out of water in a new school after his mum (Maria Doyle Kennedy) and dad (Aiden Gillen) decide to save some cash at the same time as realising their marriage may be beyond redemption in a country which still forbids divorce.

Synge Street School - a real Dublin establishment which old boy Carney insists is much changed from its depiction here - is a rough-around-the-edges Catholic, run by the despotic Brother Baxter (Don Wycherley). It is outside the school gates that Conor first claps eyes on Raphina (Boynton), an old-beyond-her-years teen, an aspiring model, whose double-denim, hoop earrings and perm look carefully copied from the pages of Just Seventeen. In a bid to get closer to her, he declares he wants her to be in his band's next video. The only problem being, he doesn't have a band, a situation he soon rectifies with the help of up-and-coming likely lad Darren (Ben Carolan), rabbit-loving musical genius Eammon (Mark McKenna) and the school's token black kid Ngig (Percy Chamburuka) among others. The biggest shame of the plot is that despite initially looking as though it might subvert expectations regarding Ngig, it ultimately uses him as little more than set-dressing - although he is not the only band character who is under-written.

Carney is in his element in these early stages of the band, deftly portraying them as just bad enough but improving, so as to keep the musical numbers coming, while the costume and hair department have great fun showing the fickle nature of 80s fashions, as Conor swaps his Simon Le Bon affectations for Robert Smith and then Tony Hadley under the tutelage of his brother Brendan (Jack Reynor). The music is a perfect match for the era, with Riddle of The Model - and the gang's rough-shot video - marrying the flamboyance of a time when pop promos were considered The Best Thing Ever to some Dublin grit as Raphina stands moodily in an alley while the boys gurn away behind the instruments.

Unlike many band films, the group play second fiddle to the romance plot and while it never breaks the mould, Boynton and Walsh-Peelo have a watchable charm. It is the musical moments when the film is at its best, however, particularly towards the inevitable school disco climax, which sees a grimy rehearsal room transformed into a 1950s style Back To The Future prom night to the accompaniment of the Hall & Oates inspired Drive It Like You Stole It. Carney simply loves the music of the era and adores these kids, and his affection is infectious, helping you to forget the more standard issue elements of the plot in favour of embracing its fairy-tale flourishes. 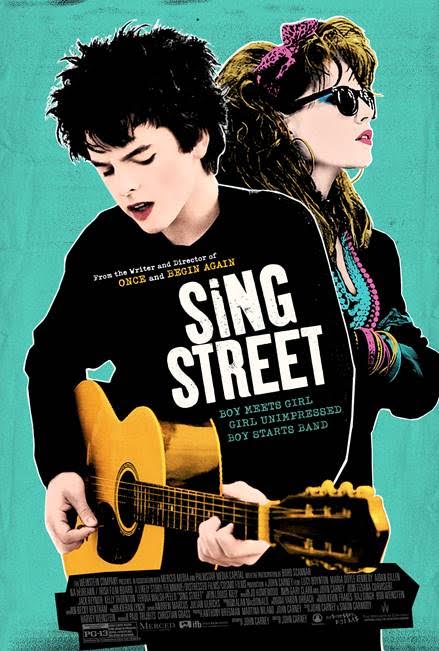 A boy in mid-80s Ireland tries to win the heart of the girl of his dreams by starting a band.

Bart Got A Room
The Commitments
Grease
Gregory's Girl