The opening shot of Steven Soderbergh's captivating and scrupulously deceiving prescription drug drama Side Effects, shows a large New York residential building, just as the sunlight hits. Then the camera swoops to the dark side of the premises, in through a window, down to the bloody footprints on the floor, until a flashback to three months earlier will explain it all. Soderbergh's disasters are elegant as they unfold calmly in front of our eyes. Authenticity in the particulars aids the trust you have to have to follow the winding roads of the mind depicted in this film.

Rooney Mara's Emily Taylor refreshes her matte rosy lip tint in the car before visiting her husband. Martin, nearing the end of serving a four-year sentence in a federal prison for insider trading, is played by Channing Tatum, and fully believable when he talks about a brochure on reintegrating. "It says, go slow," and we see his mind cooking up plans in how to get back his wealthy lifestyle fast, through "a guy" he "met inside," and his old business contacts. Soderbergh and screenwriter Scott Z Burns blur the boundaries of these worlds beautifully. But the story is not really about that, or is it?

Jude Law plays psychiatrist Dr Jonathan Banks, who is introduced to us speaking French to a disturbed Haitian man in the emergency room of a hospital, who insists he saw his phantom Papa in a taxi. Dr Banks explains to an officer that it is "perfectly normal for them to see the dead. He's fine". Right after that, Banks moves on to his next go-see at the hospital, Emily, who drove her car against the word Exit on a wall in a parking garage. Rooney Mara's performance is exciting and unsettling, and some of her reactions will be turned topsy-turvy in your memory.

Emily wants help. She will see Dr Banks and receive pills that "stop the brain telling you you're sad". Two brilliant moments in Side Effects show Emily having a breakdown of sorts. The brilliance comes from the women reacting to it. Her boss (Polly Draper) follows Emily running to the toilet at work. Her expression is insincere, bordering on inappropriate concern for her employee, mixed with almost feeling harassed by someone else's stress, until she sees the pills Emily left by the sink in her cosmetics pouch. "Oh, these made me sick too," is the realisation that turns her face human again. Nothing to really be concerned about, just side-effects, is what we read on her face.

That is mirrored by Kayla (Mamie Gummer), a friend from the Taylors' Greenwich, Connecticut past, before the insider trading scandal blew up the idyll. At a party on a yacht at night, Gummer reacts to her friend's public crying fit with a perfectly fake anxious grimace until it settles into a recommendation of "a medication that really helped". The terror of having to care about the pain of another human being looks frightfully authentic in these moments. It's the iceberg out at sea.

How the story of psycho pharmaceuticals turns into a psycho thriller has a lot to do with Emily's not-so-secret ex-therapist Dr Victoria Siebert, played by Catherine Zeta-Jones with dark rimmed glasses, hoop earrings and lipliner around her pouty lips, a face adorned with so many circles that want to lasso you in. Her scenes might evoke movies such as Edward Zwick's 2010 Love And Other Drugs or her husband's (Michael Douglas') role in Paul Verhoeven's 1992 Basic Instinct, as she shape-shifts through the plot.

"Depression is the inability to construct a future, but you have a future," pleads Dr Banks with Emily, who decides she likes the new drug Ablixa best. Soderbergh uses New York City to great non-touristy advantage. The momentarily happy couple, Emily and the newly released Martin, have coffee on the High Line, buildings are going up fast near Ground Zero as seen through office windows, and the 155th Street Subway station is indeed on the C line. This is especially important in a movie where flashbacks blur with the drug companies' feel-good commercials, where side-effects may include making breakfast in the middle of the night, and where a number of people share the symptom that “every afternoon at three there's this poisonous fog bank rolling in on my mind”.

When asked why he works as a psychiatrist in the US and not Britain, Dr Banks explains that: "Here the assumption is they are getting better, in the UK that they are sick."

"Consciousness gives context," is the reason why sleepwalkers are acquitted of crimes. Red Bull, green tea and bottles of Rolling Rock keep the overworked doctor alert, while new meaning can be allocated to salt water and sailboats. Soderbergh, just as he did with his 2011 film Contagion shows that the disaster you expected safely elsewhere, is right in front of you. We are convinced to keep in mind, that "past behaviour is the best predictor of future behaviour." Or, as Jay Gatsby puts it: "Can’t repeat the past?…Why of course you can!"

The pills are free, and the doctor gets paid, as women form medicated bonds that comfort no one. 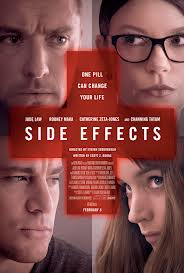 A successful couple's lives spiral out of control after one of them is prescribed a drug to treat anxiety.