The legend of medieval cannibal clan chief Sawney Bean has scared bairns for centuries, putting Scotland on the worldwide horror map and inspiring a succession of films from Wes Craven's The Hills Have Eyes (successfully remade by Alexandre Aja) to the Robert Carlyle-starring Ravenous. A modern update on the cave-dwelling villain, Sawney: Flesh of Man marks the debut of local writer/director Ricky Wood, who enlisted his non-professional brother and father to help him get the project onto the screen. The result may not be entirely successful, but a game David Hayman chews up the scenery and everyone in sight with gusto while Wood often transcends his obviously low budget through gleeful nastiness, sly humor and some of the best Highland location work since A Lonely Place To Die.

When a girl disappears after a night of clubbing in Glasgow city centre, her loved ones are devastated by newspaper reports claiming she has been the victim of a brutal murderer. In a vain bid to win back the girl's sister's affections, alcoholic journalist Hamish takes it upon himself to uncover the truth, thoroughly ruffling police feathers in the process. His trail of crumbs leads him to the Highland hideout of the Bean clan, who've been snatching people to torture, rape and cannibalise for centuries. The inbred family have their own share of problems as well however, leading to a showdown where their barbaric past may bite them back.

Early scenes make excellent use of Glasgow's intimidating backstreets, with a familiar and normally reassuring sight imaginatively put to twisted use for wrangling Sawney's prey. The first glimpses of his underground lair are also well-realised - both inside and out - with the rugged beauty of the waterfall entrance contrasting superbly against the more stereotypical disused mining tunnels concealed within.

Wood gets straight down to business establishing his queasy mixture of off-beat humor and grotty gore, with all manner of rubbery prosthetic body parts sloshing around in syrupy blood as respected thesp Hayman goes about his salacious duty, bossing around his minion siblings and butchering everything he gets his hands on. While the lighting and make-up scream no-budget (there's no need whatsoever for the ridiculously cheap white contacts Hayman sports), there's enough skin-crawling energy to the action to reel horror fans in, even if it's a more tongue-in-cheek than frightening take on a legend that could and probably should have been translated into something properly disturbing.

The dramatic side of Wood's script and direction often falls flat unfortunately, with English actor Samuel Feeney miscast and out-of-place as nominal hero Hamish, despite the script making pointed reference to the inappropriateness of his moniker. His journalistic instincts only make him harder to like - it's never clear whether his motivations are purely selfish or actually noble - while his amateurish sleuthing and functioning alcoholism stretch credibility to the limit. The more serious scenes between Feeney and Bill Munro's amusingly vitriolic copper also feel half-baked and dragged-out, despite the latter's entertaining mad-dog stare and abrasive 'Weegie-isms.

Even though she's clearly the best actor in Wood's ensemble, poor Elizabeth Brown is put through some uncomfortably gratuitous abuse, tipping the tone into torture-porn territory at times. This grimness does eventually give way to some enjoyably anarchic nonsense, involving Hayman laying waste to the technological trappings we're so dependent on, as well as a couple of free-running mutants facing off in an impromptu martial arts brawl. There's also some under-developed religious satire and a third-act shift into another genre entirely, but the anything-goes climax doesn't quite come off, being neither funny nor visceral enough to be particularly memorable.

For all its flaws though, Sawney is a fairly accomplished first feature that at least has the good sense to revel in its silliness without resorting to self-indulgent irony. It's a real mixed broth with some ingredients that leave a foul aftertaste, but it will appeal to Scots who've been raised on the myth and perhaps never seen their land in this light, as well as horror fans abroad, for whom this should prove an evocative time-waster. Despite some awkward handling of his ambitious script, there's reason here to tentatively look forward to whatever Wood tackles in the future, and Hayman's literally lip-smacking lunacy is worth the price of admission alone. 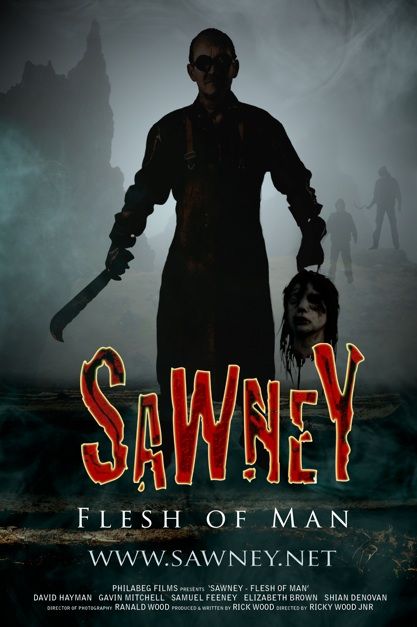 As detectives hunt for a serial killer, a tabloid crime writer uncovers the truth about the cannibal clan responsible for increasing disappearances, but he doesn't know their darkest secret.