I completely embarrassed myself when I saw this at the cinema by crying. I NEVER cry at films and was determined to hold on to it. But within ten minutes I was HOWLING.

And I don't mean a single manly tear to be brushed away either. I mean uncontrollable, chest-heaving, snotters-coming-out-of-both-nostrils blubbering. And it even continued out in the street as I walked home.

In my defence though, the rest of the audience was the same. People must have thought we were coming out of a Scottish Conservative Party meeting or something.

It's the story of a five-year-old trying to come to grips with the death of her mother in a car accident. Ponette's attempts to rationalise what has happened and her efforts to "bargain" with God to see her mother one last time are by turns funny, touching, magical, and incredibly sad. (My favourite bit is where Ponette is shut in a wheelie-bin in an attempt to prove her bravery to God. Also another child's take on the difference between Arabs and Jews).

It's the best film I've seen for capturing what it feels like to be a kid since Whistle Down the Wind. And these are real kids too, no sanitised, romanticised, apple-cheeked moppets. But basically, it's a film that says when it comes to matters of death and religion, we're all children. It's a lovely, lyrical little film with a startlingly good performance by little Ponette. Borrow it or buy it or rent it. 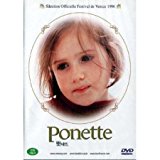 A little girl comes to terms with the death of her mum.