A true-life tall tale released just in time for Oscar consideration (not to mention being a classic winter warmer), Philomena is a much richer and deeper experience than anyone may have suspected. Anchored by a never-better Judi Dench and Steve Coogan in his most mature and substantial dramatic role to date (he’s given much more to do here than the short shrift he got in What Maisie Knew), Stephen Frears subversively backtracks to his sparky best for an adaptation of BBC scapegoat Martin Sixsmith’s 2009 chronicle. The result may well be one of the films of the year, a sure-fire crowd-pleaser with the power to sneak up on wary boyfriends and jaded snobs alike.

God-fearing Irish widower Philomena is haunted by a secret she’s kept for years: as a convent-bound teenager her infant son was taken from her by unscrupulous nuns and given to a rich foreign family. When she has finally confided to her daughter on the date of his 50th, the story is brought to the attention of disgraced reporter Martin Sixsmith, whose initial incalcitrance gives way when his desperation for a job dawns on him. Their journey takes them from Philomena’s hometown to Washington DC, where Philomena fears her son may have become an alcoholic, a drug addict or – God forbid – one of America’s morbidly obese. The truth takes them further from their comfort zone than they could ever imagine, testing their brittle relationship and forcing them both to confront their own natures.

The sense of characters wrestling with the narratives of their own (and unknown family members’) lives makes Philomena reminiscent of oddball Sean Penn vehicle This Must Be The Place, but Frears is much more successful and even-handed than Paolo Sorrentino in his examination of our innate desires to know and share our own selves and our histories. At crucial points on Philomena's journey, when it seems like she may be doubting her beliefs, our heroine is actually doubting whether she wants to know the truth, and in turn whether she wants anyone else to know it. This tension keeps her relationship with Sixsmith charged with friction, the increasingly frustrated journo caught between exploitation and empathy.

Frears isn’t afraid to go to darker, bleaker and more impassioned places than you might expect from the director of The Queen (it’s easy to forget how daring he’s been in the past), but the melodrama is always tempered by Coogan’s customary stoicism and Dench’s gracefully layered turn. In her model of forgiveness and compassion, Philomena could indeed be taken as a saint, refusing to bow to Coogan’s righteous indignation even when the bitter truth is revealed in harrowing detail. To the very end, she insists on seizing control of her own story, and while her religion feels like a coping mechanism to deal with the injustices she’s faced, her devotion remains admirably firm throughout.

Thankfully, Philomena the film is neither as stuffy or as fluffy as it could – and indeed appears - to be, and this is mostly down to the central pair, an abundance of sardonic wit supplied thanks to Coogan’s expertly-timed quips but also warm, homely humour due to Dench’s brilliantly balanced performance. Her child-like enthusiasm in flying to the US is offset by her canniness, while her recounting of her romantic reading habits to an amusingly aloof Sixsmith is a show-stopping highlight, confirming her and Coogan as an unlikely double act with outstanding odd-couple chemistry.

It’s difficult to warm to Sixsmith for most of the duration but Coogan tempers him with just the right amount of doubt in what he’s doing in a way that neatly mirrors his subject. From wondering whether he’s wasting his time slumming it with a pensioner in dogged pursuit of a career suicide ‘human interest’ story to questioning whether he can live with himself for what he’s putting her through, his arc is arguably the backbone of the story, and will be reflected by much of the audience’s reactions: even cynics should find themselves unexpectedly challenged and moved. The targets for Sixsmith’s – and therefore Frears’ and our own – ire may be obvious, whether it’s the Catholic church or newspaper big-wigs, but his mounting sense of moral responsibility is brilliantly played.

From the inter-generational issues and harsh political realities it portrays (which mercifully haven’t been signposted by the trailer), the amount of ground covered by the script – by Coogan and Pierrepoint screenwriter Jeff Pope - is a genuine surprise, and none of it feels forced or rushed. This is a major achievement in such a curt 95 minute run-time; Philomena’s efficiency feels like a blessing in this era of bloated 2.5-hr epics, and its brisk nature makes its bittersweet pull all the more affecting. Where many would-be weepies have their non-target audience crying for the ending to hurry up and come, this will have even the bitterest viewer sobbing into their popcorn, and Philomena’s trials and strength of character reverberate for some time after.

With perfectly pitched period flashbacks, genre-defyingly imaginative cinematography and a peerless supporting cast – lent an air of believability for being mercifully devoid of recognisable thesps for once – there really isn’t much to fault in Philomena. Deeply snotty cineastes may turn their nose up at the easy laughs generated from the eponymous wifey’s naivete, but even these are relevant to building such a rounded character and when Dench snaps out of her quaint parochialisms she fiercely banishes any burgeoning sentimentality. If Oscar doesn’t come calling for Philomena, Frears, Dench and perhaps even Coogan, it will be down to the glut of forgettable Brit-fodder flicks that have been lionised at the awards lately; it will also be a crime comparable to those depicted onscreen. 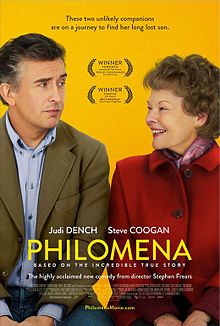 The true story of an Irish Catholic woman who decides to find her son more than 50 years after she was forced, as an unmarried mother, to give him up for adoption.

Faith and fierceness in Philomena

Oranges And Sunshine
This Must Be The Place