Reviewed by: The Dude

Did you know that Peter Gabriel's Sledgehammer is MTV's most played video of all time? Sorry. Hope I'm not the only one, but I was definitely up for the pleasant surprise that is Play, his newest and best Greatest Hits project that features 25 music videos that span and celebrate his 25-year career.

Although Stephen Johnson's direction of Sledgehammer is absolutely one of music video's most innovative, Gabriel's musical talent and use of visual expression to the limit is what impresses most. Johnson's direction on Steam also displays a dynamic use of special effects and a striking example of the introduction of computer animation to our contemporary visual encyclopaedia. Isaac Julien's direction of Shaking The Tree is the embodiment of Gabriel's continuing interest in the natural elements, a theme so often present in his lyrics, and Francois Vogel's interpretation of Growing Up is nothing short of a psychedelic feast. Need I go on?

Also included in the collection are new videos created for songs that never made it on television, although they should have. Unfortunately, the compilation that is In Your Eyes (my favourite Gabriel song) is disappointing and amateurish. While some of the footage used is professionally shot, it is interspersed with archive film and modern images that take away from any kind of cohesive theme, or visual rhythm.

On the upside, however, the song, along with all the sound on the DVD, is in Dolby 5.1, so you don't have to watch the video if you don't want to. The same goes for Gabriel's daughter's direction of Father Son. I almost shed a tear the first time I watched it, as it includes footage of Gabriel with his father, as well as his three-year-old son: a really touching idea. Unfortunately, there isn't a lot else to look it, just editing between two or three different types of footage. While one can appreciate the simplicity and beauty of the family bond - and believe me, I do - it's not a lot to hold your attention. Again, listen to the song; you don't need to watch the video.

For what you get for your money, this is a worthwhile retrospective, if you don't have Gabriel's Greatest Hits album yet, and even if you do, it's time to consider an upgrade. 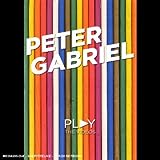 Avant garde selection of clips and music from the former Genesis frontman.