The title, as it so often is with short films like this, bitterly ironic. At least it is for mum Mena (Rita Martins), who is trying to organise a birthday party for her daughter Clara (Melissa Matos). Her daughter is fizzing about the place in contrast to her mum's stress.

As the day progresses, director Sofia Bost and her cinematographer Rita Martins - shooting in the manner of the Ken Loach kitchen sink school - contrast the cheerful mayhem created by a houseful of children with Mena's careworn demeanour, which is only made worse by a call from her mother.

Martins, whose work has mostly been in TV to this point, is the film's chief selling point, bringing an A game to Mena's body language as well as delivering the script.

The narrative, written by Tiago Bastos Capitão, is spare and while the scripting feels naturalistic, the decision to infer almost everything about Mena's, without being specific, feels frustratingly oblique in places - it's fine to expect your audience to do some lifting, but asking them to carry the mental equivalent of a piano upstairs single-handed is a bit much. The story has the feeling of a testing ground for ideas that could be expanded into a longer feature, less would be more in terms of a 17-minute short, but there's plenty of scope for intriguing expansion if Bost and Capitão do take the plunge. 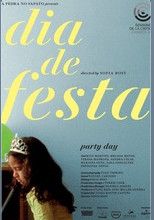 Mena organises a birthday party for a daughter. But after a phone call from her mother, she becomes distraught.