"Darkest Peru", is where we first encounter our hero, as curious explorer Montgomery Clyde (Tim Downie) meets a clan of very intelligent bears and spreads to them the gospel of orange marmalade like a missionary, rather than someone looking for a specimen to exhibit in London. Their home resembles a giant hornets' nest. Gifted with a snow globe and human speech recordings on how to face the weather and the natives in Great Britain, three bears are reminded that they are always welcome to visit.

One is named Aunt Lucy, after the explorer's mother (voiced by Imelda Staunton) and another Uncle Pastuzo, named after an exotic boxer (voiced by Michael Gambon). In no time at all, the quick learners begin producing the coveted marmalade after Clyde's departure.

Directed by Paul King, co-written with Hamish McColl and based on Michael Bond's classic novels, Paddington is irresistible, funny and smartly constructed with a disarmingly big heart.

An earthquake hits the Peruvian jungle and the little bear (voiced by Ben Whishaw) is shipped off to London for safety alone by boat. The journey's mood morphs smoothly from John Huston's The African Queen via Ang Lee's Life Of Pi to a cargo ship arrival recalling the one in Aki Kaurismäki's Le Havre. At Paddington station, the young bear comes across the perplexed Brown family, who by a split decision, offer him a place to stay for the night so that he can make plans to find Clyde or another kind of home.

Family dynamics are much more complicated in London.

Sally Hawkins has more charm here as Mrs. Brown, who illustrates adventure stories and for research explores the sewers of London, than she has been allowed to display before. She even overcomes what could be the most horrendously garish outfits seen on film over the past year. When she crawls, legs and all, into her big, home-knit, striped sweater on the bed, worried sick about the whereabouts of the newly-named, unacknowledged, yet emotionally already firmly planted family member Paddington, Hawkins' performance holds the world together.

Hugh Bonneville allows us to watch his Mr. Brown go through a number of transformations which all make perfect sense. He is a risk analyst who switched his motorcycle for a beige Volvo after the birth of his first child, and a man who knows that if you take in a bear even for one night, you might want to immediately upgrade your home insurance policy. When confronted with bureaucratic injustice at the Geographer's Guild, he forgoes laminated maps and doesn't shy away from cross-dressing or flirting with strangers to set things right. "70% of childhood accidents start with jumping," informs Mr. Brown, and the first paw step over the threshold can mean the beginning of a new life. The universe of Paddington is one where painted blossoms fade when you do what is morally wrong.

Their children, a serious minded Judy (Madeleine Harris) and an intrepid Jonathan (Samuel Joslin) are developed characters who respectively study business Chinese ("I have been accused of insider trading") and can work wonders with an outdated chemistry set. Nautical expert and family member Mrs. Bird (Julie Walters), who has a vacuum cleaner for every occasion, can be very spiritedly convincing when put to the test.

Paddington does chaos like no other and his heart is always in the right place, which is one hell of a combination for those around him. The ways he attempts to fix a torn phonebook page or involuntarily turns into a flying "tiny police bear" are masterfully constructed physical humor. His creative and futile attempt at minimising the damage done to his host's bathroom equals that of Peter Sellers in Blake Edwards' The Party. His bear relatives back in darkest Peru called him "Little Hurricane" and he does live up to his nickname. The comedy is as wonderfully light as the fear is dark.

The classic fairy tale of Hansel And Gretel derives much of its power from the initial all-encompassing terror any child can identify with - to overhear the parents plotting to get rid of them. The tale takes this basic childhood fear very seriously and King's movie is wise to construct a version of the same existential dilemma. The trend in recent years for children's films to focus on happy endings by embracing the importance of family ties, instead of love interests, often seems contrived and escapist while re-enforcing separation anxiety. Sisterly love, or motherly love, have become the pseudo-progressive wrap-up. Not so with Paddington.

Nicole Kidman makes a marvellous (Michael) Bond villain, sporting a pale blond Anna Wintour coif and the evil twinkle of a daughter filled with scorn for a father who in her eyes brought humiliation onto the family. When asked if the mysterious species of bear that shipped into London harbor was endangered, Kidman's Millicent, who specialises in taxidermy at the National History Museum, doesn't hesitate - "he is now". She is a slinky Fantômas, part elephant-snake, part high-heeled alluring mastermind shooting tranquiliser darts. The movie finds elegant, time efficient solutions for her quest to capture the little immigrant with the red hat.

The nosy and easily frightened neighbour Mr. Curry, is played by Peter Capaldi as a sleazy stork, stalking ineffectually in grotesquely comic sequences until he, too, gets a chance to shine. Even the taxi driver (Matt Lucas) or the various security guards who kill their time by, for example, guessing the sodium content of their cookies, are more than important parts of the plot. Showing the Browns' home cut open like a doll house is in Wes Anderson fashion, reminiscent of Moonrise Kingdom. The similarity is more than an aesthetic choice. Family is a messy edifice and difficult to keep under control. Especially when a wet-nosed, hard-staring bear is determined to join it.

War references are subtle, yet obviously intended: there is a shelter handy in the jungle when the earthquake hits, Mrs Brown's friend Mr. Gruber (Jim Broadbent with a faintly wacky German accent and an English idiom handicap - "pocket picketing") shares more than the memory of a name tag around his neck with our hero, and the escape through an oven and up the smokestack are not random choices. These allusions never interrupt the carefully constructed flow, they heighten what is at stake when you close the door on someone in need.

Watch closely and you may catch the author Michael Bond toasting us upon his creation's arrival in the big city. David Heyman, who also produced last year's Best Picture Oscar nominee Gravity and the Harry Potter movies, has the magic touch in tackling stories of isolation with grace and care.

After less than a minute, I had forgotten that Paddington was of digital ancestry and found myself whole-heartedly rooting for the first cinematic incarnation of an old childhood friend. My eternal devotion to duffel coats with toggles stems from this bear.

Hats off to Moody and Farrell and a Happy New Year 2015! 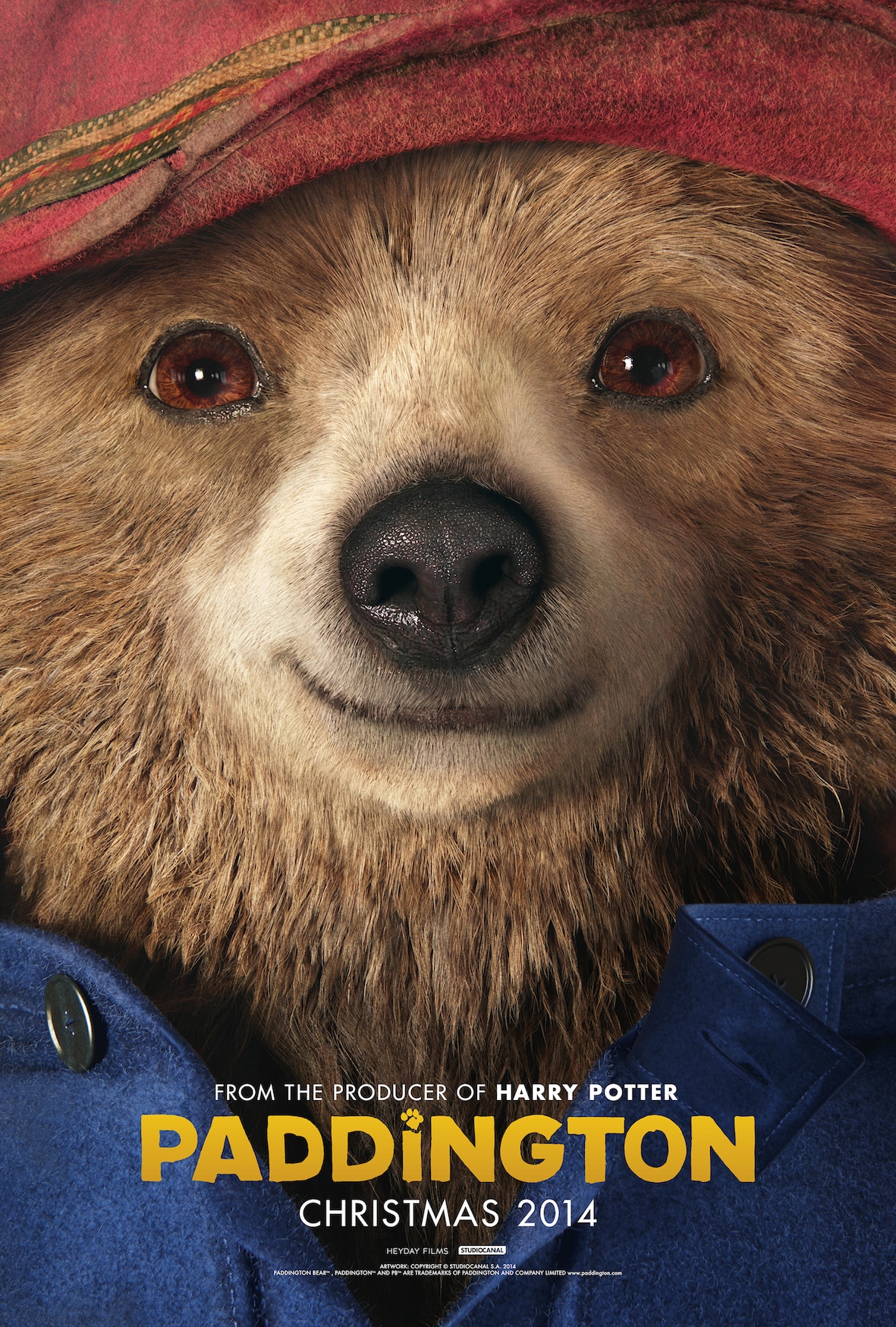 A small bear from darkest Peru tries to adjust to life in London.

Writer: Paul King and Hamish McColl, based on the books by Michael Bond