On The Edge Of The World

Claus Drexel’s highly impressive documentary On The Edge Of The World is a tableau of testimonies from Paris’ homeless community. Backdropped by the touristic familiarity of the Eiffel Tower, the Arc de Triumph and Notre Dame Cathedral, Drexel’s lowly subjects speak with an openness and trust that makes for consistently compelling viewing. The film’s focus isn’t so much the social and political causes/ramifications of widespread homelessness across the French capital as it is the phenomenon of being dispossessed itself — as told by those at the very bottom.

Rather than matching his subjects’ plight with a routinely rugged aesthetic, Drexel demonstrates both appreciable tact and a keen eye for the unexpectedly beautiful. To begin with, the director’s rigid, tripod-fixed framing — together with Sylvain Leser’s sublime night-time cinematography, on the Canon 5D digital camera — recalls 2013’s other epic ode to dilapidation and street survival: Tsai Ming-liang’s Stray Dogs, to which this is a suitable companion. In addition, Drexel places his camera close to the ground and tilted slightly upward, which, when combined with unchangingly mid-to-long shot compositions, evokes Ozu Yasujiro. High praise indeed: such comparisons are not unfavourable.

Filming exclusively at night — but for an irresistibly moving final shot — Drexel documents these people as if they are the only inhabitants on earth. Tellingly, however, the hum of traffic doubles as a constant reminder that life goes on after all. These people aren’t the lonely; they are the abandoned. Their individual histories, fears and philosophies unfold in parallel. Wenceslas reveals the contents of his tent: bedding, an icebox, a travel bag and a locker with his reading material (he reads 3-6 newspapers every day, keeping articles of interest for as long as it takes for him to absorb them). Costel, a Romanian, sleeps under a bridge by the Seine. He writes to his parents every month, telling them he has lots of work. “If my mother knew I sleep on the streets,” he tells us, “she would cry.”

Christine, who spends the whole film wrapped in foil blankets — though not enough to keep her from shivering — hints on a number of occasions at an abusive husband. “We were in a violent situation,” she says, referring to herself and her children. Jeni, with whom the film begins, speaks mostly gibberish — though presumably refers to her own history — while Michel, a 60-year-old epileptic former sailor, laughs at his own metaphorical speech: “I feel like the ship hasn’t totally sunk… I haven’t sunk yet.” It’s heartbreaking just to see how visibly pleased a man can be just to be talking with another person.

Indeed, Drexel’s portrait of life on the streets is so effective and cumulatively powerful because of the consistence patience with which it bears witness to these people. Thanks to expert, wide-lens compositions and a sometimes bedazzlingly varied colour palette, the film remains largely unsentimental. Its dynamic touch is best exemplified, perhaps, in those conversations with Pascal, a homeless father whose interviews often proceed with him accompanied by a nameless and wordless pal (and his pet cat), who amusingly commands the other half of the frame. The relationship between the two isn’t clear, but we sense the other guy, who is much larger, is a vital source of daily strength for Pascal.

“When you look at it,” says Alexandre, the film’s de facto sage, “man is regressing. He is not advancing, he is returning to his past. The caves will be palaces and apartments. The only thing missing will be the dinosaurs.” At the current impasse, it’s difficult to disagree. 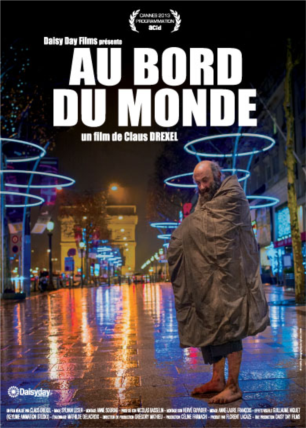 Documentary about homelessness in Paris.