Notes From Dunblane: Lessons From A School Shooting

The number of films concerning the problems of gun violence and the communities affected by it grows in length every year, with features including The Armor Of Light, 3½ Minutes, Ten Bullets and Bowling For Columbine, to name just a handful. Now Kim A Snyder, who already tackled the subject in Newtown, which talked about the community impact in the wake of the Sandy Hook Elementary School shooting, returns to the subject in this emotionally affecting short film that won the Best Documentary Short Award at Tribeca this year.

Snyder wants to remind us, again, that even as the list of victims of mass shootings grows longer - and there have been more than 1600 in the US since 20 six and seven-year-olds and six teachers lost their lives in the 2012 Sandy Hook shooting - that the impact on each community never goes away. Someone who knew this all too well when he heard about the deaths in Newtown was Father Basil O’Sullivan - the priest of a church whose Scottish town of Dunblane had also been devastated by a mass shooting.

The Stirlingshire town had been put on the map in the most terrible of ways in the "cold and austere" March of 1996, when Thomas Hamilton shot 16 five and six-year-olds and their teacher dead in Dunblane Primary School, and wounded a further 12 kids and two teachers. O'Sullivan explained all this in a letter he wrote to fellow priest Father Bob Weiss in Newtown, Connecticut, expressing sympathy and solidarity for his experience.

Structuring this 22-minute short around the men's correspondence, interwoven with interviews with them on both sides of the Atlantic and culminating in O'Sullivan visiting Newtown on the first anniversary of the atrocity, Snyder let's the churchmen's emotional recollections do the talking - which proves to be a deeply moving experience. The Dunblane priest reveals the difficulties in ministering to a wide flock when he himself was also experiencing trauma, saying that for a year or two "the very sight of a five-year-old child would make me cry". Meanwhile, Fr Weiss is still unable to talk about the incident without breaking down, "I'm exhausted, physically, spiritually and emotionally", he admits. Both men, in a way, become spokesmen for their traumatised community as well as spiritual guiders, just as they became a conduit for the outpouring of grief in the wake of the attacks.

Synder comes at the idea of gun control tangentially, showing how the Dunblane community fought for and won real change to the laws of the UK, but more important is the idea of coming together in grief to offer solidarity with one another and an empathy that the wider community who are unaffected might find harder to provide. Snyder offers a window into the lasting pain caused by such attacks but also a shaft of hope in the ways that support can come from unexpected places. This is not a call to arms, but a call to wrap your arms around someone else or simply link arms with them and, with luck, keep moving forward to help forge a less violent future for others and some inner peace. 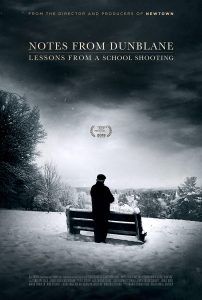 Documentary charting the friendship that grew between two priests on either side of the Atlantic after their communities were rocked by school shootings.
Visit The Official Site

The Armor Of Light