It's the twists and turns rather than the sudden moves you need to be aware of as you approach Steven Sodebergh's latest snakey and sneaky Fifties-set crime thriller. What starts as an almost domestic story involving a couple of low-rent hoods will gradually morph into a game of high stakes with unlikely players and a plotline that takes its cue from events in the real world full of corporate rather than card sharks.

Not that Curtis Goynes (Don Cheadle) realises that to start with. A savvy ex-con, who we'll learn has a secret or two in his pocket, he gets hired along with the racist, less smart Ronald Russo (Benecio Del Toro), to do a spot of "babysitting". Both of them have enemies in the mob, including crime bosses Frank Capelli (Ray Liotta) and Aldrick Watkins (Bill Duke), and neither of them is happy to discover the job watching over the family of pen pusher Matt Wertz (David Harbour) involves a third criminal, Charley (Kieran Culkin).

In the spirit of noir, what seems like it should be easy money turns out to be anything but, when the piece of paper Matt is supposed to retrieve from the safe is missing and someone somewhere might well have an ulterior motive for wanting Curtis and Ronald to be sitting ducks. This is only the start of scriptwriter Ed Solomon's plot that sprouts slippery tentacles in several - perhaps at least two too many - directions at once. Curtis sees an opportunity to make a buck and takes Ronald along for muscle, little realising the larger wheels that are turning, involving another sort of kingpin altogether (played with cool ese by Matt Damon). Then there's the cop (Jon Hamm) who doesn't quite believe the tale Matt has cooked up with his wife (Amy Seimetz), and an obligatory femme fatale (Julia Fox).

Soderbergh eats up this sort of thing like breakfast pancakes, keeping the pace tight and the mood claustrophobic, an atmosphere reinforced by the editing and lensing (also by Soderbergh, under his regular pseudonyms Mary Ann Bernard and Peter Andrews). The latter, gives a 'fisheye' effect to the edges of the frame so that the straight and narrow are literally bent out of shape, mirroring the crooked dealings at the heart of the film. While the style is never in doubt - the production design is a Fifties fan's dream with its vintage motors and sharp costuming all set off by David Holmes' suitably jazzy score - it threatens to be a bit too clever for its own good as what looks like a McGuffin is only bluffing and the bigger picture is gradually revealed. Still, as Curtis would no doubt tell you, better to be too clever than too stupid.

No Sudden Move is available on Sky Cinema and streaming service NOW from 9 October. 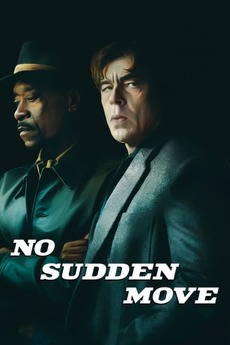 Two small-time criminals find themselves mixed up in a complex heist after a babysitting job goes south.