Over the years, mankind has constantly tested itself in pursuit of the seemingly impossible. To conquer mountains and oceans, build cathedrals or construct works of art. And, of course, to buy all 678 commercially available Nintendo game titles in less than a month. If that doesn’t sound to you like the premise on which a compelling, universally resonant movie could be made… well, you’re probably right. But Robert McCallum’s quirky road trip documentary does end up generating enough humour, tension and pathos to be of interest to non-geeks.

It’s the story of his best friend Jay Bartlett, owner of a game shop in London, Ontario, whose sole passions are “gaming, rock and Star Wars”. Somewhat out of the blue, and for no immediately apparent reason, Jay decides he must acquire all 678 titles released by Nintendo, the 80s pioneers of home gaming.

A tricky enough task in itself, considering the old single-figure pixels sagas of Super Mario, Zelda etc are museum pieces in the ‘Grand Theft Auto’ era, largely confined to the specialist sector. But Jay also decides it must be done inside 30 days, entirely self-funded – and using no online resources.

This basically means a lot of car journeys to the far corners of North America, seeking out the shops and homes of like-minded enthusiasts. McCallum narrates, and interviews several luminaries of the gaming world and the Nintendo fanbase, but a large part of the film is the camera tracking Jay’s attempts to negotiate prices for the dozen or so real rarities in the canon. And his musings on why exactly he’s doing this.

At first I thought this was going to be a real slog. The narrative tone is equal parts fanboy vlog and anodyne local TV news slot. The cast largely consists of middle-aged manchildren who’ve had insufficient exposure to sunlight, vegetables and the opposite sex. And the 30-year-old output of an admittedly innovative Japanese video game company is described with the reverence usually accorded to the works of Michelangelo.

But as it progressed, Jay’s enthusiasm for the ruling passion of his life, and McCallum’s paternal affection for his somewhat unworldly bezzie mate, won me over. The personal connection with the rest of the (remarkably extensive) Nintendo collector community is obviously important enough for Jay to eschew the internet option, which would net him 90% of his trophies in a few mouse clicks. And the discipline involved in meeting the self-imposed deadline, and not going cap in hand for funds to acquire games whose rarity value commands price tags in the tens of thousands, starts to make sense in the context of a life that’s had its fair share of troubles.

McCallum lets all this unfold gently and unobtrusively. But he finds it hard to stay detached when the community gets wind of Jay’s project. Rival collectors start throwing spanners in the works, pouncing on rare titles half an hour before he arrives at the store. And the owners of the prize titles (such as Stadium Events, the Nintendo fan’s equivalent of a Shakespeare folio) see an opportunity to be involved in a ‘media event’ and get top dollar for their merchandise…

The tension as Jay faces hard decisions when deadline day approaches and the money runs short is well handled. But for the most part (as in a touching coda) the community forms a surrogate family for a fellow enthusiast and genuinely helps to fill a gap in his life. McCallum’s ability to get Jay to open up about his difficult relationship with his father, and his reasons for his quixotic quest, is genuinely moving. And his filmmaker’s fascination with the box art and other paraphernalia of the Nintendo package will strike a chord with anyone who’s ever preferred acquiring a unique physical object to downloading a few streams of digital information.

In the end, Jay’s obsession is no stranger than those of the people who must have a Prada dress they’ll only ever wear once, or would pay whatever it takes to acquire a vinyl copy of a record they could download for free. It may seem strange, but it’s important to him. To really enjoy this film, it’s probably best if you speak a bit of geek. But there’s enough of it in a universal language to be rewarding. 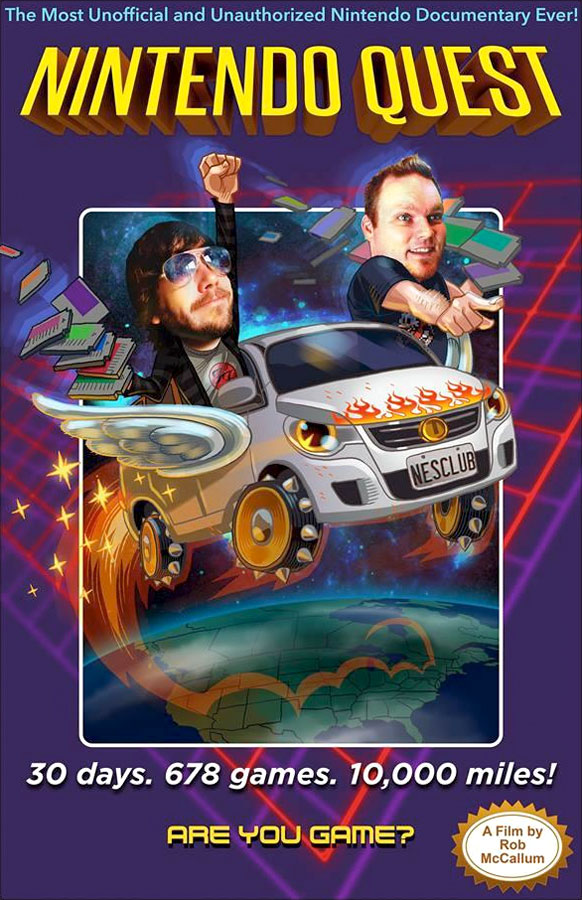 A Canadian gaming fan sets out to acquire all 678 Nintendo games.

Dragonslayer
Dogtown And Z-Boys
The King Of Kong