Perspectives and perceptions are skewed in Mug - from the prejudiced blindspots of some of its characters to the physical restriction suffered part way through by its protagonist Jacek (Mateusz Kosciukiewicz). Writer/director Malgorzata Szumowska and her co-writer and cinematographer Michael Englert physically encapsulate this idea from the start with lensing that is fuzzy at the edges, with only one point in sharp focus.

The setting is small-town Poland, where they are building "the biggest statue of Christ in the world" - an idea inspired by the real town of Wiebodzin in the west of the country, which did just that. Jacek works on the building site for the monument but has no interest in the Catholicism it espouses, preferring to keep faith with Metallica instead - the rock band's Hardwired lyrics "We're so f***ed we're s**t out of luck" blaring from his tiny car when he bolts along in it. He, in fact, is one of the few people in his inward-looking town not to be hardwired to a fixed ideology, just one of many deep ironies that litter the film, which like Szumowska and Englert's previous collaboration Body, explores its uncomfortable subject through a strain of the darkest black humour.

The film establishes Jacek as a fun-loving, easygoing sort, who takes a playful approach to his family's latent racism and prejudices and is deeply in love with local gal Dagmara (Margorzata Gorol). An accident on the monument, however, leaves him with catastrophic injuries requiring the country's first face transplant, leading him to become not just the focus of his small community, but the country at large.

Following in a fine tradition of 'the grotesque' stretching back into fairy tale, Jacek may face physical deformity as a result of the transplant but he remains a warm and upbeat character, while the moral ugliness of those around him, with the exception of his sister (Agnieszka Podsiadlik), is accentuated in relief. Szumowska isn't aiming for subtly here and runs the risks of some of the townsfolk's attitudes slipping into broad brush character but the pathos at the film's heart for Jacek off-sets the problem. This is in no small part due to Kosciukiewicz whose gripping performance is all the more remarkable when you consider the amount of make-up he was under for the large proportion of it. Though occasionally feeling like shooting fish in a barrel - particularly in its well-worn sideswipes at the Catholic Church - this is an energetic and anarchic film that commands the attention. 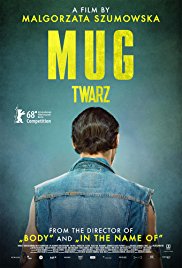 Jacek enjoys his existence as a cool misfit in his Polish backwater. After a terrible accident on the site where the world’s largest statue of Jesus is being constructed, he is celebrated as a national hero and martyr.