Getting-to-know-you games with fellow students who don't remember your name, insipid university guidance counselors, a grumpy, sleepy roommate, and unappetising cafeteria food set the tone of college life rapidly within the first moments of Noah Baumbach's wittily wonderful 21st century take on classic screwball comedies. Co-written with Greta Gerwig, this high-spirited coming-of-age trip takes Tracy (Lola Kirke), a freshman at Barnard on Manhattan's Upper West Side, who is facing these not entirely uncommon obstacles, on a roller-coaster ride of discovery.

Tracy's mother (Kathryn Erbe) is about to get married over the Thanksgiving holiday break, to a geologist who is "really into Jesus" and has a daughter named Brooke (Gerwig), who lives in New York. The two soon-to-be stepsisters meet for the first time at Times Square, with Brooke's grand entrance, descending the red steps over the TKTS booth with a smile, parting the lumbering tourists, as if she were Georges Guétary building a "Stairway to Paradise" in Vincente Minnelli's An American In Paris. Her ebullient charms sweep Tracy off her feet - for her, she holds the keys to the city. Tracy may be romantic but she is not blind.

Brooke is a full-fledged, though anything but settled, character. "Her beauty", Tracy in voice-over tells us, "was that rare kind that makes you want to be more like yourself, not her." Brooke lives in a divine but illegal workspace loft, teaches spinning classes at SoulCycle, and is in the process of opening her own restaurant/haircutting place/art gallery/hearthstone for the lost lambs of New York. That, of course, is easier said than done, and when financing (from Greece!) falls through, Brooke and Tracy do what many a savvy Woody Allen hero would do. They see a clairvoyant.

As matter-of-factly as the narrator in Paul Thomas Anderson's Inherent Vice, Sortilège (Joanna Newsom), with her Ouija board, while physically resembling rock singer, Little Bob, out of Aki Kaurismäki's Le Havre, the psychic (Frank Iacuzzo) in Mistress America informs Brooke and Tracy what "spirit says." Kirke's face registers everything as she puts two and two together - they have to go on a road trip to Greenwich, Connecticut, where Brooke's old nemesis and former best friend, Mamie Claire (Heather Lind), now lives. Mamie Claire, who in the past stole not only Brooke's wealthy boyfriend, Dylan (Michael Chernus, giving new meaning to a fleece vest), but also a lucrative T-shirt idea, plus her two cats, is likened to a "cashmere sweater from Old Navy" and needs to be confronted.

After having Ann Roth as his costume designer for some of his previous films, this time out, Baumbach chose Sarah Mae Burton, who worked with Jason Schwartzman on Bored To Death. Lola Kirke is currently filming in New York for Schwartzman's Mozart in the Jungle series.

Tracy's one new college friend, Tony (Matthew Shear), has a car he doesn't like to leave Manhattan with and an outspokenly jealous girlfriend, Nicolette (Jasmine Cephas-Jones). The four of them, absurdly, yet perfectly in line with the film's unique logic, head out of town to possibly get financing from Dylan and set things right. Baumbach has a special knack for directing people in cars to riotous effect and the dialogue sparkles all over with wit and joy and perceptiveness.

The mayhem on the way to, and the events in the great big glass house in Connecticut, brought to mind Bringing Up Baby, with the two "stolen" cats functioning as cheeky footnotes on Howard Hawks' loose leopards. A rather unpredictable neighbor, Harold (Dean Wareham, who also did the perfectly placed original music for the film) and a pregnant lawyer friend named Karen (Cindy Cheung), constantly resisting offers of wine by her host Mamie Claire, give Charlie Ruggles' Major Applegate a run for his money. Freshman Tony seems very impressed by the group of "super smart" pregnant women, discussing Faulkner and Derrida, who also happen to be at the house when they arrive.

Who needs a college writers club, filled to the brim with nervous aggression, wood shavings, heavy briefcases and power-game-pies-in-the-face, when you can write about Brooke and her tribulations maybe, possibly outside of "Moebius Magazine"? "Baby Tracy," as her new big sister calls her, learns a lot in a short amount of time, from how to buy pasta on her own, to how it feels when you really hurt someone. And we are allowed to be with these fascinatingly annoying people for a while before we have to leave them again, at Veselka, in the East Village, to continue with our own fascinating and annoying lives. "I'm the same in another direction now," says Tracy to Tony. "Your whole generation is all pastiche," warns Karen.

In and out of sliding doors, Mistress America, holds up shards of a broken mirror for what is left of this American dream. 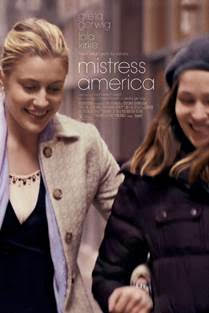 Two young women have unpredictable adventures in New York City and beyond.