Director Sean Ellis has always had a talent for visuals. In his 2006 feature debut Cashback, he froze time and in 2008's The Brøken, he proved he could find cruel beauty in a car wreck and set nerves jangling. But if, in both those films, the story and pacing didn't quite match up to the camerawork, third time is most certainly the charm, because Metro Manila is a film to be reckoned with, offering a gripping narrative, poetic imagery and some social commentary to boot.

Ellis has never been afraid of mixing genre and here he nimbly takes his film from docu-style arthouse territory into the realms of a heist without missing a beat. His story - co-scripted with Frank E Flowers - is firmly embedded in the chaotic capital of the Philippines, where he shot in the local Tagalog language, which adds much to the movie's authenticity. Oscar Ramirez (Jack Macapagal) is an archetypal family man, earnest and hardworking, not that that matters much in a world full of injustice. He, his wife Mai (Althea Vega), young daughter Angel (Erin Panlilo) and baby (Iasha Aceio) are eking out an existence in the countryside, where unscrupulous payments for grain make it impossible to sustain a living. Hoping for more luck in the bright lights of Manila, they head to the city, where it seems the amoral wolves - including those in sheep's clothing - are in even more plentiful supply.

Ripped off at virtually every turn - "winning is not a reality" - they find themselves living in a shanty town hovel, with desperation leading Mai to take a job at the local bar, where kissing and caressing balls feature higher on the menu than serving booze. Oscar, meanwhile, finally seems to get a stroke of luck when his army tattoo sees a fellow former serviceman give him a break and get him hired as an armoured truck driver and guard. "I like you because you don't lie," his benefactor and new colleague Ong (John Arcilla) tells him, which may well be the only sincere thing he says in the film. When things look too good to be true, there's a real chance that they are and it's not long that Oscar is facing uncomfortable compromise on a path where "the only thing left to hang on to is the blade of a knife".

Ellis takes his time to let us get to know the Ramirez family, from Oscar's endearing but dangrous naivety to Mai's determination to feed her children no matter what personal cost and Angel's stoic acceptance of a toothache her family can't afford to get fixed. Theirs is a tight unit and we want to look after them and to warn them that beneath the smiles and shiny billboards, it's even more of a jungle out there than they think. He also captures the flavour of Manila - his bustling street scenes recalling those in Amok - as a place teeming with life, if not opportunity.

But this is far more than simply a tale of migration miserablism, as thriller elements begin to stalk the narrative until, in the last 30 minutes or so, Ellis goes in for the kill. The scripting is tight and Ellis isn't scared to let his camera do the talking, drawing us in to the story emotionally before proving he has a trick or two up his sleeve that masterfully pulls together what has gone before. As the film hurtles towards its conclusion, it proves it has brains as well as beauty. This is Ellis's strongest film to date and suggests he is likely to continue to stretch himself and hone his skills with each project - he deserves to be much more well-known here at home. 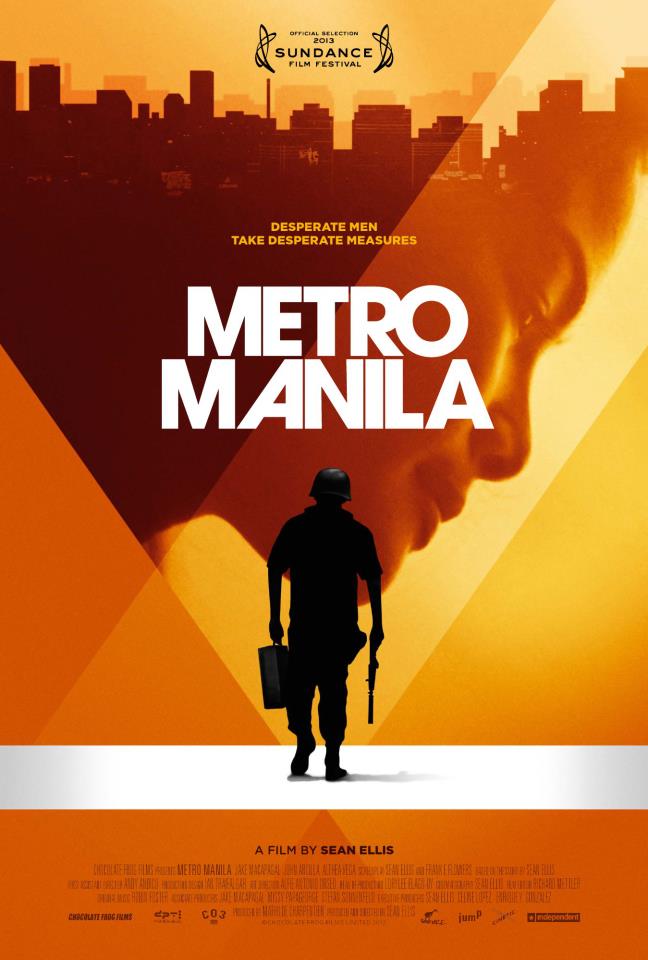 The trials of a family who move to Manila in search of a better life.

Amok
Mondomanila, Or: How I Fixed My Hair After A Rather Long Journey
The Yellow Sea