Memoirs Of A Geisha

The Floating World of the Geisha brought to glorious life.

A definition firstly: geishas are not prostitutes; they are professional hostesses, entertainers and, if they are lucky, mistresses to powerful patrons. Unlike common bishonen ("tavern wenches"), they are not available to anyone with a few pennies to manhandle as they please. Or, as Michelle Yeoh's character Mameha puts it, "Remember, Chiyo, geishas are not courtesans. And we are not wives. We sell our skills, not our bodies. We create another secret world, a place only of beauty. The very word 'geisha' means artist and to be a geisha is to be judged as a moving work of art."

This a memorable film, luxurious and intense. The highest compliment I can give it is that I thought it was an Asian film that happened to have been superbly dubbed, or else was (unusually) filmed in English.

I am a fan of Asian Cinema. I adore the genre, from cheesy HK kung-fu films of the Seventies to masterpieces like Rashomon. The recent spate of beautifully photographed, imaginatively choreographed and well acted Wuxia epics, such as Crouching Tiger, Hidden Dragon, Hero and House Of Flying Daggers, have brought a bright new talent to Western and Eastern audiences - Zhang Ziyi.

Here, she displays her trademark youthful spirit, combined with quiet strength, as the apprentice geisha Sayuri. Once more, Yeoh reprises her role of mentor and Ziyi as protegee, although this time their relationship is a lot better than in Crouching Tiger.

The finest Asian acting talent is on display, often in surprisingly different roles to the ones we in the West have become used to. Ken Watanabe is more familiar cast as villain. In this film, he is a kindly businessman, called The Chairman, who helps Sayuri achieve her dreams.

Gong Li also stars as Hatsumomo, a jealous, ageing geisha, who sees the young Sayuri as a rival to her ambitions. Ten years ago, it might have been Li playing the new geisha and Yeoh as the jealous rival, but times have changed...

A special mention must be reserved for Suzuka Ohgo, as nine-year-old Chiyo, who grows up to become Sayuri - the reason for the name change is that in Japan it is common to take a new name at significant points in one's life. Miss Ohgo is a talented young actress and shows great skill and self possession as the brave and determined girl, who was to grow up to become the most famous geisha in Japan. I look forward to seeing if this early promise is fulfilled in later roles.

The cinematography is reminiscent of other Japanese films, such as Gohatto, also set in a closed and secret world, churning beneath the surface with petty jealousies and deceit. Cherry blossoms, which have long been a symbol of transient beauty, are a frequent visual metaphor in this and other such films, including anime - play The Spotting Game and see how many you find.

Kyoto is a forest of rooftops and narrow winding streets, both dangerous and exciting. Then there are the magnificent shots of wide-open landscape, such as the scene with the handkerchief. (I won't spoil things by saying more, but just let your eyes and soul drink in the visual power of the image).

John Williams' beautiful score has an expected Oriental twist, reminiscent of Crouching Tiger, with excellent solo work from Yo Yo Ma. It is most effective when traditional instruments, such as the samisen, are used.

Look out for the scene near the beginning where nine-year-old Chiyo is desperate to find the Pleasure House to where her older sister was sold. The tension of this scene comes from Chiyo frantically searching through the grey and grimy back streets, with rain pouring down. The frantic hollow clacking of percussion instruments in the background increases the tension. You cannot help but sit at the edge of your seat in suspense at the craft of this scene.

Rob Marshall (Chicago) took the director's chair after Steven Spielberg passed, but, as I said before, the film's tone does not feel like a Hollywood picture. It has all the beauty, melodrama and sensitivity we have come to expect from Asian Cinema, with its explosive colour, texture, style and innate substance. 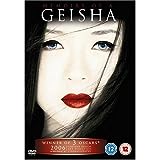 The grooming of the most famous geisha in Japan.

Writer: Robin Swicord, based on the novel by Arthur Golden