Meeting the future in-laws is like walking barefoot through gorse. Daddy isn't going to let his little girl go to a scrawny no-hoper like you. He wants a man with prospects.

Greg (Ben Stiller) starts badly. He hears that presents are good and so brings a big pot with earth in it, because Pam (Teri Polo) told him that her father, Jack (Robert De Niro), is a retired florist. He's nothing of the sort as it turns out, but you don't know that then. He tells Jack that under the earth is a Jerusalem lily. Jack looks confused.

Things don't get any better. For one thing, Greg is a male nurse. He's not even a junior doctor. Also, he hates animals that scratch and if Jack loves anything in life as much as Pammy, it's his fat cat that has been taught to use the lavatory.

Greg and Pam live together in the city. Her parents have no idea. Separate rooms are arranged, two floors apart. Greg has lost his luggage and has to wear Jack's clothes. The weekend looms ahead like a black hole.

They are there for Pam's sister's wedding. She's marrying a Jack person, son of a WASPish surgeon. That's another thing. Greg is Jewish. His real name is Gaylord and his last name Focker. He smokes. If Jack dislikes anything more than a cat hater, it's the smell of cigarettes.

The farce is underplayed, which is exactly right. De Niro in a flat cap, playing the man of property, is funny without falling over the furniture. Stiller allows the situation to unhinge him. All he can do is survive.

As a contemporary American comedy of manners, there are limitations and surprises. The dialogue cracks convention, although the snobbery is intact. No one says what they feel until things get so bad, there's nothing to lose. Greg wonders, is love worth the hassle? Is life meant to be this hard? 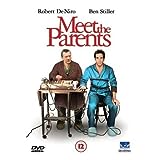 Stiller's would-be husband discovers his potential father-in-law is a nightmare.