Screening as part of Edinburgh Film Festival's Focus on Mexico strand, the acclaimed classic María Candelaria was the first Mexican film to be screened at Cannes where it was awarded a Grand Prix (later renamed as the Palme d'Or) in 1946.

In pre-revolutionary Mexico, the eponymous María Candelaria (Dolores del Rio) is an indigenous woman ostracised by the local community because her mother was a prostitute (previously killed by said community in order to absolve the town of shame). She finds herself in dire straits when a debt is called in and events - and locals - conspire against her possible happiness. Although supported by the local priest, María Candelaria's only true ally is her intended, Lorenzo Rafael (Pedro Armendáriz) - and the couple's pet piglet.

Director Emilio "el Indio" Fernández shows the indigenous characters - as embodied by María Candelaria and Lorenzo Rafael - to be noble and decent people who faced huge prejudice (as his nickname indicates, Fernández had roots in that community himself). María Candelaria's current predicament begins when local big shot Don Damian (Miguel Inclán) calls in a debt but refuses to accept produce as payment in kind, instead demanding either money or the piglet. All dressed in black and something of a caricature bad guy - although his authority is undermined on several occasions by mockery - Don Damian repeatedly refers to Lorenzo Rafael as a "damned Indian" and refuses to give he or María Candelaria the quinine he is supposed to be distributing to the locals to protect against an outbreak of malaria - setting into motion the events that will be the couple's undoing.

Likewise, the depiction of the prejudiced villagers - mainly shrill and bullying women - is not particularly subtle, although the interactions with the priest show a more complex and fluctuating negotiation between narrowminded superstition and (in this context) a comparatively enlightened form of Christianity. The malicious nature of the village women (all scowlers perpetually giving the evil eye) is also contrasted with the 'innocent' beauty of María Candelaria - "the essence of true Mexican beauty" according to the painter (Alberto Galán) who is also instrumental to the tragedy that unfolds.

Fernández was one of the most important directors in Mexican cinema in the 1940s and 50s and the film draws on the team with whom he repeatedly worked in this era - writer Mauricio Magdaleno, cinematographer Gabriel Figueroa, editor Gloria Schoemann, and actors Pedro Armendáriz and Dolores del Rio. But the film has dated - it is difficult to tell whether the stiltedness of some of the acting is a case of acting styles changing over time or whether Dolores del Rio was habitually as wooden as she is here. Nonetheless, even with the murky 35mm print shown in Edinburgh, there are several standout compositions among Figueroa's cinematography (which was also rewarded at Cannes) - including the dramatic skies for which he was famous and the sight of lit torches making their way through the floating gardens in the dark - that make the film worth seeing. 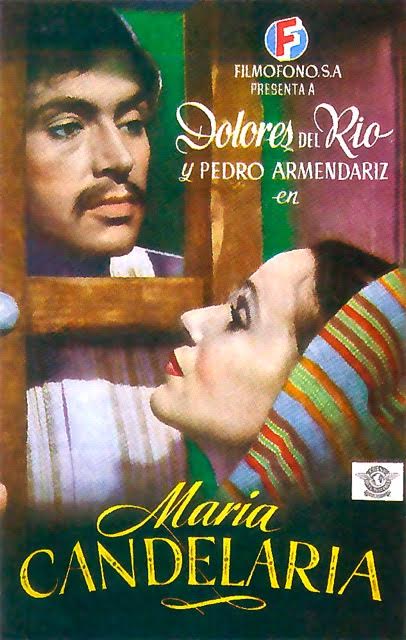 A young woman faces prejudice because her mother was a prostitute.