Thomas Cailley keeps technology out of the picture in Love At First Fight (Les Combattants) for the most part. He shows the toll it has taken on the way people interact with each other face to face. Characters are hungry to find enjoyment by giving up the every day, ordinary pleasures shoved at them by a society with pre-packaged dreams that hold no allure.

It is a film that feels achingly of the now. Young people in the provinces, grappling to envision a future for themselves, hardly display emotion. Their faces have become screens that light up sporadically and when finally and unexpectedly a smile breaks through, the effect is astonishing.

We open with Arnaud (Kévin Azaïs) helping out his older brother Manu (Antoine Laurent) to keep the Labrède family carpentry business going after their father's death. One day, at the beach in front of a pop-up army recruiting kiosk next to a children's carousel, Arnaud's pals sign him up to fight a girl in an impromptu self-defense demonstration. This is how he meets Madeleine (Adèle Haenel), who toughens herself up in hopes to join a particularly rough regiment of the military.

Madeleine's parents (Léa Pelletant and Pascal Bernagaud), people who have a house with a swimming pool, are mere shadows signifying her social background, nothing more. Arnaud, who together with his brother was hired to build them a pool house, has obviously and madly fallen for their daughter, so much so that he enrolls for the same two-week training boot camp as a surprise to be with her.

Haenel, who looks part Kate Winslet, part action figure in tank top and cut-offs, makes Madeleine's inconsistencies beautifully believable. When she tosses a raw sardine in the blender and drinks the bloody liquid right out of the mixing vessel or shoves heavy roof tiles into her backpack and jumps into the pool to practice skills of survival, her determination borders on the ridiculous and that seems to be exactly where she wants it.

Madeleine quit college where she majored in End of the World Studies, a choice that shows where Cailley locates the pulse of her generation, growing up on dystopian young adult fiction and depending on the background, the lure of militant religious organisations to find meaning in life.

Cinematographer David Cailley, the director's brother, offers stark beauty and wicked humor. Three young guys sitting on the beach blow up three freebie army beach mattresses. The olive green camouflage pattern, of course, camouflages nothing in the sand or sea. It is a toy, a plaything, something to momentarily counter the unbearable boredom.

Two dead defrosting chicks rotating on a microwave carousel, later to be fed to Arnaud's pet baby ferret, is another image that sticks. What seems contrived at first becomes a valid moment of symbolism. "Always hit beyond your target," is double visualisation advice that works outside the battlefield as well.

Madeleine, whose name, of all names, winks at Vertigo, intends to invent herself as strong and rugged and independent. At a nightclub called Shark, Arnaud suggests that she could have made an effort and worn a skirt or put her hair up (in Antoine Barraud's Portrait Of The Artist, also in this year's Rendez-Vous with French Cinema, the exact same Vertigo hair reference produces a very different reaction). She looks great and a bit like a Mediterranean lifeguard from the 1970s in her white polo shirt and low waisted black pants, shrugs off the sexist comments and focuses her attention on learning the art of opening a beer bottle with her teeth.

Food is one of the things that make her realise that her idolisation of the survival training has little to do with reality. Candy bars, french fries and caramel pudding served for lunch, as well as fifteen minute cigarette breaks during class when the instructor seems challenged by his students' questions, are received as self-important and farcical by the tough cookies who signed up to be warriors. And, worst of all, nobody teaches these collectors of survival pointers that you can't eat a fox.

Respite in nature, more than ever, comes across as a mirage preceding an apocalypse that has begun. The present in the wild already belongs to the past. As a swan song of the forest, images of the couple in the woods leave room for a wealth of associations. The Cailley brothers capture the zeitgeist because Adam and Eve regaining paradise is as easily conjured up as are Wes Anderson's runaways in Moonrise Kingdom or Hunger Game phantasies by adolescents all over the world.

Love At First Fight (Les Combattants) will be screening at the 20th Anniversary of Rendez-Vous with French Cinema in New York with Thomas Cailley and composers Hit and Run scheduled to participate in Q&As. 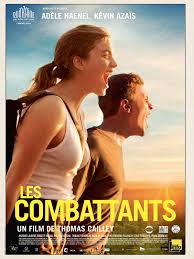 Between his friends and the family business, Arnaud’s summer looks set to be a peaceful one. Peaceful until he runs into Madeleine, as beautiful as she is brusque.