A thorny drama that puts the audience through the mill alongside its weary protagonists - much like the similarly-themed and equally gruelling Essential Killing - Lore makes a belated and unexpected follow-up for Aussie director Cate Shortland to her well-received cinematic debut Somersault. Scratch beneath the surface though and it's easy to see how Rachel Seiffert's novel about another young girl forced to embark on a perilous journey away from home would resonate with Shortland, adapting the material with a sure hand for period feel, historical context and the intimate details that pile up so inexorably. While the woozily heavy-handed style and grinding intensity may alienate some viewers, there's no denying Saskia Rosendahl is stunning in the lead role, with great support from Kai-Peter Malina and a string of excellent child actors ensuring audience complicity for the duration.

15-year-old Lore's comfortable existence falls apart when the encroaching end of World War II separates her from her affluent Nazi parents. Lumbering her with her four younger siblings - one of whom is a constantly screaming baby - her mother has given her vague directions through the Black Forest to her grandmother's house hundreds of miles away, leaving the group with some of the family's trinkets with which to pay their way. Lore soon finds that everything she has been brought up to believe isn't as clear-cut as it seems, and soon learns to be suspicious of the people she comes across on her trek. After trailing them for days, insistent Jewish youth Thomas comes to the party's aid, but Lore's inherited prejudices and confusing hormonal feelings threaten to drive him off when they need him the most.

Shortland sets up her provocative subject matter with a minimum of fuss during opening scenes in the family's sprawling home. Nazi regalia is matter-of-factly glimpsed, and there's an air of tension belying the returning father's interaction with his adoring children, but otherwise this could be any loving, well-to-do family. Slowly, Lore begins to feel something is amiss, and we bear witness from her perspective to several menacing situations. As she is charged with the children's welfare, it's impossible not to feel sympathy and admiration for the naive youth, keeping a level head and setting off with little idea of the hardship she faces - at times her ordeal puts the viewer in mind of The Passion Of The Christ, although here the suffering is even more keenly felt for being so internalised.

As Lore encounters fellow Nazis, Jewish survivors and American soldiers, Shortland wrings palpable tension from her attempts to grasp the situations at hand - her eyes furtively dart around in efforts to sniff out danger and protect her family. She does this almost instinctively, reacting like a feral animal to the unwanted attentions of outsiders, emphasising the dark Brothers Grimm quality to her travels through otherwise beautiful countryside; with little dialogue and even less in the way of actual action, Shortland builds a suffocating atmosphere of hidden peril all around. The open spaces somehow become claustrophobic, while the constant close-ups of itchy, dirt-flecked skin and soiled clothes hammer home the group's on-going discomfort.

When Malina's Thomas joins the frosty Lore, Shortland skilfully fosters a dynamic of simmering sexual tension, where the pair's backgrounds and perceived ideology cause friction with their sheer animalistic need for solace in one another. The performances from the two young actors really come into their own here, with a fierce chemistry between them that keeps the viewer on their side even when their characters play hurtful and potentially life-threatening mind games with one another.

As the journey stretches into the second hour, Shortland aces a couple of nail-biting suspense sequences that brilliantly highlight the characters' desperation and growing sense of mutual trust and understanding, while portraying how this crumbling society became even more amoral in its dying days. Where it would have been easy to soften Lore, Shortland refuses to get sentimental, keeping us hanging on the edge with her as events grow more traumatic and leaving us on a bittersweet note that ambiguously depicts how much the experience has changed her, a sense of regret and disillusionment ensuring the film should stay with viewers for some time.

Despite an occasionally indulgent visual style, this is an enthralling and involving sophomore feature for Shortland, as emotionally draining but sumptuous for the audience as the similarly location-dependent Van Diemen's Land. With brilliant cinematography and outstanding performances, there's much to appreciate on the surface, while the thorny nature of the story will keep it reverberating around your head long after. It's perhaps too demanding a watch for mainstream viewers - although teenagers should easily relate to its depiction of growing pains and trial through adversity - but it's a vivid insight into how hard it can be for innocent youths to go from blind faith in the adults before them to their own sense of tragic enlightenment. 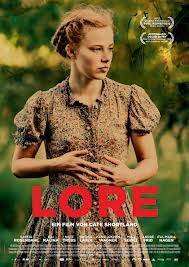 Teenager Lore and her four younger siblings are left to fend for themselves after her Nazi SS parents are taken into Allied custody.

Grave Of The Fireflies