Personal freedom and how to achieve it is one of the thrusts for Senator Enrico Oliveri's (Toni Servillo) escape from public life. He has been the head of the opposition for far too long. He is burnt out. Before making a routine speech, he freezes for a moment. It is election time, he has been "running the party forever" and decides to disappear.

His Chief of Staff, Andrea Bottini (Valerio Mastandrea), is quick to invent a sudden illness. Nobody must know that nobody knows where the important but little missed man went to. Always pretend that you know what is going on is the motto of politics and Italian society at large.

Oliveri's wife Anna (Michela Cesco) returns from a business trip and even she doesn't know where her husband went and informs Bottini of Enrico's twin brother, Giovanni, a philosopher who has just been released from a mental institution. Servillo plays both brothers, glasses off, glasses on, with their respective states of mind written on his face as though he were Olivia de Havilland in the Dark Mirror. Who's who and who's crazy or not shifts and blurs seamlessly.

Enrico listens to his own illness on French radio while making an omelette. The title of his brother's book is The Illusion Of Living. Like a vampire, he can't go out for a walk in Paris during the day, because he is so famous. The brother enjoys the spotlight. His "insanity" gives him the right amount of knowingness. With enough conviction you can sell the masses "passion" as a new and redeeming political concept. "Fear is the music of democracy," Giovanni proclaims while everyone, from the president and the media, to his brother's wife fall for the charming impostor.

In Paris, Mung accompanies Enrico for a nightly stroll to get medication while comparing their jobs. "Politics and cinema are similar. Bluffing and genius co-exist in both and it's hard to tell them apart." The politician collapses in the pharmacy, he suffers from depression. Becoming assistant prop man on the film set in the French countryside where Danielle is script supervisor might be a cure. An affair with a younger woman on the set could be another obvious crutch to get his life back together.

Meanwhile in Italy, the crazy brother enjoys newfound power. Politicians all falsify their biographies. "In the chamber not one idiot knows he is an idiot." Servillo seduces with his Great Beauty dance moves. Giovanni meets the president and plays hide and seek around the globes in the map room. He doesn't have to climb on one to conjure up images of Chaplin in The Great Dictator. Andò's motion picture references are many. There is an interview clip with Fellini, and Mung's little daughter sees as many as four films a week, some of them beyond her understanding.

Long Live Freedom wanders through the fantasy of swapping your life for another with a touch of Being There, if Peter Sellers' Chauncey Gardiner had a twin. 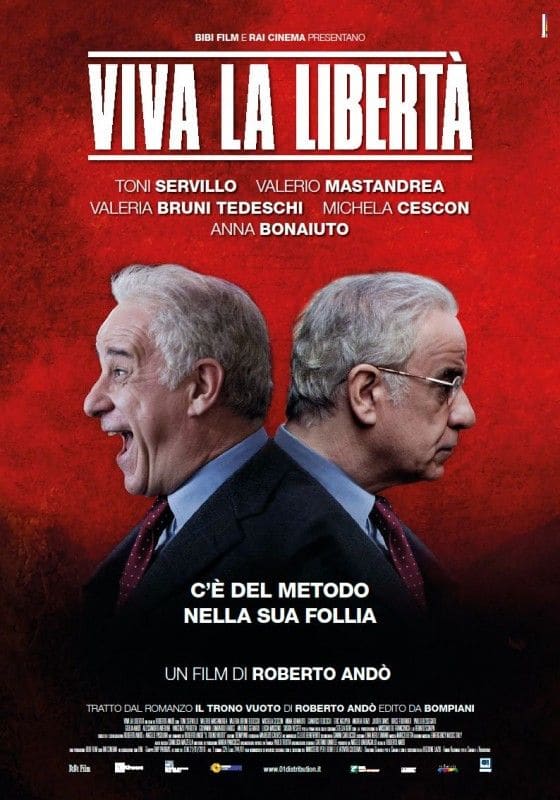 After an under-pressure politician disappears, his look-alike brother fills the gap... and starts to win popular support.