Arriving in Paris from New York to attend a meeting of Holocaust survivors, Myriam Rosenfeld (Anouk Aimee, standing in for director Marceline Loridan-Ivens) wins a raffle trip to Cracow and, after some prevarication, decides to go - back to Poland and the death camps at Auschwitz-Birkenau, which translates as Birch Tree Meadow, the innocuous sounding English language title, for the first time in more than half a century.

As Myriam wanders the desolate, largely deserted remains of the camp, memories and questions overwhelm her. How and why did she survive? Was she right to do so? What does it mean to be Jewish?

After a while she meets a young German, who is photographing the camp, trying to make it yield up its essence. He asks her for help and hesitantly she agrees. Then he divulges his own personal connection: his grandfather was a SS man here, a fact that his father had only revealed on his deathbed and one which understandably cannot but affect Myriam's response.

La Petite Prairie Aux Bouleaux is a fine, well-made and thought-provoking film. However, it is not without its flaws, which must be addressed, even if it is inherently difficult to criticise the piece on grounds of its subject matter and autobiographical nature. Nonetheless, something seems lacking, preventing it from being as powerful and overwhelming a piece of cinema as you think it ought.

Maybe, it's not seeing the spontaneous reactions of Loridan-Ivens herself. While Anouk Aimee delivers a quality performance, one can never quite escape the sense that she is a movie star playing a scripted role - with contributions from Jeanne Moreau - being too glamorous and, for want of a better word, healthy to make a completely convincing death camp survivor, even if nearly 60 years are supposed to have passed since her liberation. Here, one thinks of the embarrassing coda to Schindler's List, with Spielberg wheeling out the decrepit forms of the remaining schindlerjuden. The intent might have been laudable, but the effect borderline laughable.

Or, perhaps, it's the sheer difficulty of the task Loridan-Ivens has set herself, that of showing what a character within the film refers to as "the invisible". Or, to put it another way, of illuminating everything that can be simultaneously repressed and represented by the invocation of that single talismanic shorthand sign: The Holocaust.

There's also the nagging sense that even had Loridan-Ivens been present and successfully expressed the inexpressible, the film would still fall prey to compassion fatigure, the sense that, after Night And Fog - there's more than a hint of Alain Resnais about Loridan-Ivens style - Shoah and the aforementioned Schindler's List among others, the subject has been overexposed or, in the worst cases, exploited so that, as one of the passers-by at the camp comments: "There's nothing left to see here." 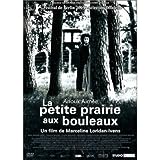