It may not spring many surprises but Ken Loach’s 12th entry in the Cannes Film Festival is imbued with all the qualities we have come to expect from the director who has ploughed a particular socially aware furrow.

He possesses an almost unique voice in British cinema that has never waivered, offering humane values, working class ethics and impassioned pleas against injustice wherever it lurks.

Set in 1930s Ireland, what he has devised here can undoubtedly be viewed as companion piece to his 2006 Palme d’Or winning The Wind That Shakes The Barley.

Collaborating yet again with regular sympathiser and collaborator Paul Laverty, he tells the true story of agitator James Gralton, who was self-educated, a people’s hero, and the scurge of the Roman Catholic Church, wealthy landowners and the ruling elite.

One of his main crimes was to build and run a local hall, which served the community for dances, boxing classes, singing lessons, poetry readings and debates. Why was he considered so subversive and dangerous? He encouraged people to follow his example and think for themselves.

He has found a charismatic lead actor in Barry Ward as Gralton, returning to Ireland after spending a decade away in the United States during the Depression. With the death of his brother he returns home to help his mother with the family farm.

With encouragement and help from the locals he reopens the almost derelict hall – which almost becomes a character in the film. At the same time as he is exposing them to the “devil’s music” (jazz) from the States on his wind-up gramophone, he strikes up a restrained romance with a married girl he once knew (Simone Kirby).

In one scene Gralton, standing in a hay cart, gives a rabble-rousing speech that evokes echoes of the current financial debate as he recalls his experiences in New York: "I saw the wild speculation and greed ... I saw the bubble burst."

Loach gives voice with eloquence to the disenfranchised and celebrates the spirit of working people. It is heartening to hear that contrary to previous reports, he is not about to give up film-making but will continue on this chosen path as long as he is able. 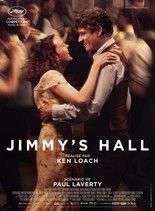 The story of political activist Jimmy Gralton, deported from Ireland during the country's Red Scare in the 1930s.