It's perhaps not the most original concept - bringing two dysfunctional families together in a cultural clash - but Billy Bob Thornton's Jayne Mansfield's Car is brought up a notch by a fine cast, some genuinely funny scenes and a curious darker streak that lies beneath the laughs. It also features titans of the screen Robert Duvall and John Hurt together in the same film, surely worth the price of admission alone.

It is 1969 in the small and very conservative town of Morrison Alabama, USA. Southern American and strict patriarch Jim Caldwell (Duvall) finds to his disgust that he is about to meet the (very) British Kingsley Bedford (Hurt), given that Bedford was his ex wife's second husband. Jim Caldwell's wife Naomi (Tippi Hedren), too adventurous for this small town, fled Morrison years ago to start a new life in England. But with Naomi now dead of cancer and her will stating she wishes her body returned to the US, the two families are set meet for the first time at the Caldwells’ Alabama home. Uneasy curiosity is the order of the day for both sides, particularly as Kingsley isn't coming alone - he's bringing reserved son Phillip (Ray Stevenson) and sophisticated party girl daughter Camilla (Frances O'Connor).

Caldwell has a barmy enough family of his own to deal with, let alone the Bedfords. His eldest son Jimbo (Robert Patrick) chafes under the knowledge that he never served in combat in the Second World War, unlike his younger brothers Skip (Billy Bob Thornton) and Carroll (Kevin Bacon). As for Skip and Carroll, despite having followed their First World War veteran father into the service, both men came back changed by their experiences, changed in ways that Jim senior finds impossible to compute. Navy pilot veteran Skip wanders around as if on another planet, whereas former Marine Carroll has crossed over to the other side in Jim's opinion, having become an anti-war activist who's daily fuel is a simmering rage against the Vietnam war and the draft.

As the two families feel each other out, hilarity, hijinks, confessions and resolutions ensue, including a shared passion for kinky sex play between Skip and Camilla, Phillip and Jim Caldwell's daughter Donna (Katherine LaNasa) discovering a passion for bedroom antics behind Donna's husband's back, and Kingsley and Jim realising that they have far more in common than a deceased wife between them.

Thornton, who plays more of a supporting role on screen, largely keeps the tone light with some slapstick and seen-it-coming cultural cliches, but keeps a dark melancholic streak not too far from the surface that might sit oddly with some viewers who will be chuckling along at the sight of Robert Duvall's character tripping accidentally on LSD. At times this film looks as though it is paying homage to the richly coloured Douglas Sirk dramas and the good old-fashioned American family comedies of the Fifties, only to, at other moments, swing into darker territory. At the press conference for the film Thornton and producer Alexander Rodnyansky also paid tipped their hats to Chekhov-type dramas.

This is a film essentially built around a contrived head-on-collision scenario that goes for the more obvious fish out of water and US vs Limey gags, but also structures a culture clash that pits the 60s against the 40s, the Old World versus the Old South, and the conflicts within the two families, whose members all are carrying war scars burned into them (physically in some cases) in different ways. Even the younger characters are on the verge of seeing being drafted into the current war.

One conflict or another hovers over almost every conversation and gesture in this film, which is itself set in an intriguing point in time - one of the only decades where every generation from the three major US wars - WWI, II and Vietnam, could be in the same room together. It's not particularly difficult to spot what themes, neuroses and generational divides are being explored here with such a backdrop, and when they will be solved, but it is at least interesting to see it done in what might otherwise be a light oddball indie comedy.

Billy Bob Thornton 's film might be too odd for some, but also too obvious and melodramatic for others. But its got a fine cast who do good work with some stereotyped roles, and it tends to throw in a laugh out loud funny or unusual observational left turn moment just often enough to paper over the cracks. 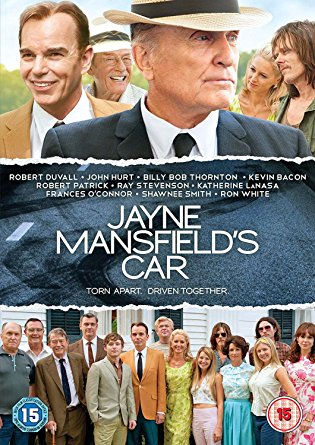