The fashion for prequels goes on. Tom Clancy wrote 11 Jack Ryan thrillers, but not this one. Alec Baldwin, Harrison Ford and Ben Affleck played Jack on screen (Clancy's fave was Affleck) and now Chris Pine, last seen as the young Capt Kirk in the Star Trek prequels, joins them.

First off, credit where credit is due. Pine does an excellent job, as the marine, wounded in Afghanistan, who is hand picked for the CIA by Harper (Kevin Costner), a cool-under-fire man of mystery.

Keira Knightley plays his doctor and later love interest. She has that rare ability of appearing completely natural. The chemistry between her and Pine fizzes.

The problems lie elsewhere. The script is clunky (Jack: "I'm in the CIA." Cathy: "Thank God! I thought you were having an affair") and the plot cannot be taken seriously.

What gave the Bourne films an edge was credibility, not that you believed they could have happened exactly the way they did, but - here's the important bit - they might. Shadow Recruit is about a Russian plan to blow up half of Manhattan and crash the New York stock exchange. It makes absolutely no sense and what's worse, by using sophisticated computer gadgetry, you haven't a clue what is going on.

Kenneth Branagh directs rather well and plays the Moscow villain rather badly. The effects and car chases offer a pale imitation of other films when it is the characters and their predicament that should be ratcheting up the tension.

Among the Internet's magic tricks hyper smart surveillance equipment can lose a thriller's objective by intimating a storyline to an audience who may not be techno literate.

Would access to an iPad have saved Harry Lime? 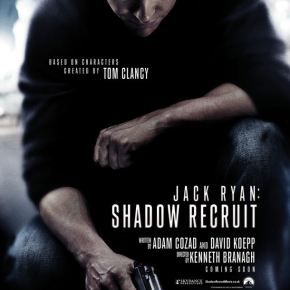 Jack Ryan uncovers a plot to wreck the US economy.