Gaudy animation, a ridiculous plot and a soundtrack that throbs with the funkiest baseline from any planet you care to visit. All these things meet in Daft Punk's personal love letter to cult animation: Interstella 5555.

If you remember Dragonball Z, and can name everyone from Sailor Moon, or have taken any interest in club music during the last three years, then chances are you'll be familiar with Daft Punk's video for their single One More Time. Interstella 5555 takes the story told in this and three others from the Discovery album and cranks them out into a full length Animated House Musical, with a story of intergalactic kidnapping, evil space ninjas, and, of course, music and its players.

We kick off watching a band, comprised of blue musicians standing on a stage in front of a blue crowd. Before long the evil ninjas drop in - don't they always? - and kidnap the band, stealing them away to a far off planet. Once there, they are redesigned into a more human image, brainwashed and sent out to make hit music for the overlord, Darkwood, to help him complete his evil plans of intergalactic domination. Only our mullet-sporting hero, flying his guitar-shaped spaceship, can possibly thwart these dastardly plans, return the band to their home world and spread a message of universal audio harmony.

The story is sillier than any animation since Jem & The Holograms (don't ask), but is perfectly crafted to mix with Daft Punk's music and the ultra-vibrant colours match the disco electro-funk strains. The animation was supervised by Leiji Matsumoto, one of the famous faces of Eighties manga and anime, long revered for his creations Captain Harlock and Galaxy Express 999, and it looks like he's not moved on too far, sometimes feeling stuck in Sunday morning television, circa 1987.

Occasionally, the animation diverges too far from the music, making it feel as though you're watching a pre-produced anime and they've slapped Discovery over the top of it. For the most part, however, it holds together very well, especially in the earlier sequences. At more than an hour, it does begin to grate a little by the end, and you'll find yourself longing for some of the tunes to finish, just so that you can move on.

Interstella 5555 is great fun, and anyone who likes retro animation, or the music of Daft Punk, will love it. Just don't go expecting the next Akira. 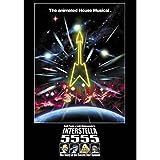