Carlton's continuing release of the Inspector Morse mysteries requires a special moment of gratitude. A communal shout of joy, perhaps.

John Thaw and Kevin Whately, as Morse and Lewis, are the perfect double act. The inspector appears permanently pissed off, except when downing a pint of real ale or offering sympathy to a beautiful woman. The sergeant has guarded respect for his boss, is far cleverer than he pretends and never lets emotion interrupt a wry observation.

After a while, you wonder whether academics at Oxford have a shelf life shorter than junior officers in the First World War. Bodies have a habit of piling up. Sex and money are the most popular motives for murder, although the former has an unfair advantage. It's rampant - off screen, naturally.

The Last Enemy begins with a headless corpse. The questions are, who, why and when. Morse has a toothache, which means he's more irritable than usual. Lewis does the leg work, which compensates for his boss's distractions.

Barry Foster is wonderfully vain and arrogant as a college head, positioning himself for an even more prestigious job. There is a sexual encounter with a student. If this sounds like a cliché, it doesn't feel like one - high flying don, ambitious undergrad, degree papers to fiddle - because the writer (Peter Buckman) and director (James Scott) are so capable.

Deceived By Flight has Lewis taking a holiday to paint his house and look after the kids. Morse won't hear of it and persuades him to come back and pretend to be a college porter's temporary replacement, in order to infiltrate a club cricket team. One of them (Daniel Massey), an old university friend of Morse, now a lawyer, married to a glamorous radio presenter, has been murdered.

The script by Anthony Minghella is witty and fluid. Morse flirts outrageously with the bereaved widow. Lewis bowls a mean medium pace. The mystery is intriguing and the tension remains taut. Thaw and Whately are working so well together now that they anticipate each other's every move. Watching them perform is on a par with spending an afternoon at Lords, when England's seamers are doing damage to the Aussies. 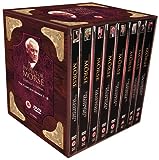 John Thaw as an Oxford detective inspector unravels a series of murders.