I Didn't Come Here To Die

Written and directed by first-timer Sullivan, this grungy looking, roughly hewn movie may have cost little more than $100,000 to make, but there's a lot more going for it than many of the bigger budgeted genre movies out there. Channeling the visual aesthetic and DIY spirit of Video Nasty era movies, the film doesn't break any new territory, not that it purports to, but it does have a lot of gory fun with the teenagers-alone-in-the-woods tale it presents.

Six volunteers of varying motivations and social backgrounds – including familiar stereotypes such as the party animal, the slut and the nerd - trek out into the middle of nowhere to begin work setting up a nature campsite for deprived kids. Despite the warnings of group leader Sophia (Emmy Robbin) alcohol is smuggled onto camp by Chris (Niko Red Star), the group's resident bad boy, providing the catalyst for the escalating chaos that unfolds.

As with the riotous Tucker And Dale Vs Evil (2010), the bloody horror and icky comedy of IDCHTD is driven by extreme mishaps, misunderstandings, paranoia and confusion. One unfortunate incident spirals into a complete breakdown of communication and civilised behaviour as the city kids find themselves out of their comfort zones and at each others mercy. Sullivan's comedy of terrors delivers a number of memorably grisly moments, timed in such a way as to add a frisson of shock value when they occur. You'll know what the movie is going to do, but you won't know how it's going to do it.

With the momentum of a train with no brakes, IDCHTD hurtles through its brief running time awash with aural and visual gags (some of which hit the spot, some of which don't), and though it may recall numerous other horrors, comedies and horror comedies, it's never overwhelmed by them. Sullivan plays around with genre traits and, given the movie's wrong-footing climax, he clearly has a knack for devising narrative twists. The young cast, with various TV bit part and B-movie credits to their names, bring an energy to the movie that helps deflect attention away from their lack of actorly weight.

If you're looking to be sucked into a narrative populated by richly drawn, three-dimensional characters, then you'll be searching in the wrong place. If, however, you fancy a short blast of gruesome chaos that relies on old-school effects work, evident enthusiasm and gleefully nasty humour, then seek it out. 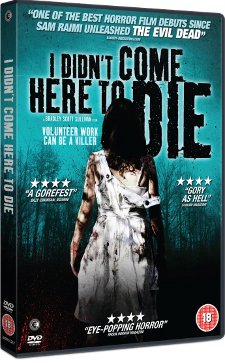