When a film feels like a play, it becomes static. Hurly Burly neither hurlies, nor burlies, rather hangs about in an LA apartment.

The men are Hollywood agents, or producers. One is a bit-part actor (Chazz Palminteri miscast), who is so depressed because his wife has dumped him that he pushes a hooker out of a moving car.

No one behaves well. Eddie (Sean Penn) is such a dopehead, he's half way round the bend. Mickey (Kevin Spacey) takes cynicism to the brink of cool, where it freezes. Artie (Garry Shandling) turns up with a teenager (Anna Paquin), as a gift for Eddie.

Normality and decency has no place in this outpost of male chauvanism. Women are treated with callous disregard, to be abused, or lied to. Repartee is barbed.

As a piece of writing, it has a sharp, smart gloss, without soul or feeling. None of the characters are likable, with the exception of Darlene (Robin Wright Penn), Eddie's on-off girlfriend, who suffers from being involved with him.

Two performances stand out for very separate reasons. As an antidote to her standard good girl roles, Meg Ryan plays the hooker and gets to say dirty words, which is like discovering that Mary Poppins menstruates. The embarrassment of this matches her inability to be seductive in a professional way.

Penn, on the other hand, is magnificent. As Eddie's cocaine addiction brings on waves of paranoia, you watch him sink into madness, which is less obvious in such company, no longer aware that life has a purpose, or a price. Acting of this quality deserves a better outlet. 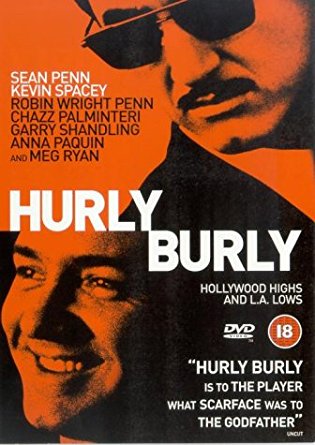 Writer: Dave Rabe, based on his own play

Get Shorty
Swimming With Sharks