In the British tradition of little-things-mean-a-lot, House! fits like chips with fish. What could be more nostalgic than a 100-year-old dance emporium, built by an Italian in a small town in South Wales that became a cinema - La Dolce Vita ran for three weeks - and is now a bingo hall?

Times, as they tend to do, have changed. La Scala - for that is its name - is still administered by a kindly, ageing member of the Anzani family (Freddie Jones), with a small, mostly loyal staff. The building has seen better days and the roof leaks. As for the toilets, don't go there. What matters is that the same old ladies come every week to win the jackpot - 30 quid if you're lucky - and be teased by Gavin (Jason Hughes), the naughty-but-nice caller.

Meanwhile, up the road, a mammoth entertainment centre is opening, with international backing and huge bingo prize nights promised. How can a run down ghost of a hall, such as La Scala, hope to compete? With trust and care and determination, that's how. Not to mention Linda (Kelly Macdonald), the girl with a psychic gift.

Julian Kemp's film has the feel good factor in spades. The ambitious smoothie, Gavin, isn't as nauseating as he appears. Mr Anzani, who still cooks a lovely pasta during the interval for the ladies, has a natural Mediterranean/Welsh charm. Linda's sweet innocence is tempered with steel when dealing with Auntie Beth (Miriam Margolyes), who wants to put her out of her recently deceased mother's home.

The film feels comfy, like a knitted cardigan, and everyone works well together. Jason Sutton's script mines the stereotypical plot with surprises, none of which are life-threatening. Macdonald is delightful. Whatever else might be lacking - originality, bite - House! has a whole lot of heart. 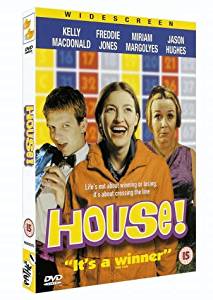 Feel good drama sees plucky locals try to save a British bingo hall after it comes under threat from a big entertainment centre.