We meet young trainee doctor Benjamin (Vincent Lacoste) on his first day of a six-month hospital placement. His confused wanderings around the dilapidated bowels of the building, as he tries to find his way to the relevant ward, are an early indication that his training will not be as easy as he confidently assumes.

Taking its name from the so-called father of Western medicine, Hippocrates from the outset shows Benjamin and his fellow interns having their commitment to patient care stretched to its limit by long hours, low pay, dwindling staff numbers, broken equipment, and the pursuit of profit by the upper echelons of hospital management. But there is also a possible play on words - the French pronunciation of Hippocrate (the original title) is very close to 'hypocrite' - as Benjamin finds that those who espouse medical ideals (including his father (Jacques Gamblin), the head of the ward he is assigned to) nonetheless sacrifice the best interests of the patients due to pressures from upper management with regards to the financial costs of appropriate care and the exigencies of available beds.

Benjamin will also have his eyes opened to injustices among his fellow practitioners. He is joined on the ward by another intern, Abdel (Reda Kateb), an older man who is a qualified doctor his homeland of Algeria but is having to take internships in order to earn his equivalence in the French medical system. Although Benjamin's nose is put out of joint by his new colleague's greater experience and ease with patients, he also sees that Abdel faces an uphill challenge in establishing his career in a foreign country.

More of a co-lead than supporting player, Abdel emerges as the moral conscience of the film, a diligent man who respects his patients but does not fit in with party-going younger colleagues. Kateb avoids making him a stick-in-the-mud - Abdel does not hide his irritation with management's bottom-line attitude and gets righteously angry on behalf of other colleagues who are shoddily treated. His nuanced performance of a humane man won Kateb the César for Best Supporting Actor. Benjamin comes to respect the older man, which further serves to highlight to him the discrepancy in how they are treated by management when each respectively breaks hospital protocol. His relationship with Abdel therefore also charts his coming-of-age as a man and a doctor - Benjamin must decide what kind of person he wishes to be.

Although the film is often darkly funny, writer-director Thomas Lilti (himself a qualified doctor) does not shy away from the difficult life and death decisions that the interns are expected to carry out in less than ideal circumstances. The juxtaposition of the juvenile and bacchanalian out-of-hours behaviour of the interns with the serious situations they are faced with on the ward presents the former as a much-needed pressure valve, but it's noticeable that the emphasis shifts to the latter as Benjamin matures and accepts responsibility for his own actions.

Overall, Hippocrates is an engaging coming-of-age drama centring on the problems within public medicine in France as budget cuts bite, with a personable protagonist in the form of Lacoste and a standout performance from Kateb. 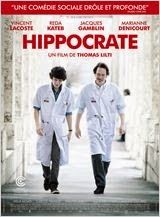 A young doctor encounters challenges he didn't expect in his first post, working for his father.