Here, Then is a startlingly dull experience; almost certainly by design. It uses a huge number of long takes and a crushing sense of self-loss to drive the viewer to empathise. But how can we do so, when every single person lacks clarity? There are no names spoken aloud - only a collection of faces and actions. The film follows a loosely connected collection of disaffected youths in rural China and Beijing. It also depicts, in monotonous tedium similar to their day-to-day lives, that they're aware that they are wasting every single moment of their lives. They blind themselves with living the good life celebrity fantasies.

There's a short sub-plot about a worker who has lost their identity card - "you lost your identity?" - it initially feels like an overtly delivered metaphor. It's ultimately a neat twist of irony; it's quite possible they never found their true identity in the first place.

Many scenes could be interesting, but Mao Mao's film mostly finds the least interesting ways possible to show it. It's full of symbolism instead of narrative, ellipticism instead of clarity, and meandering when drama is essential. We repeatedly find ourselves wandering through half-constructed abandoned buildings; again a metatextual commentary. It feels like the director and screenwriter are deliberately abandoning a strong story for desolate potency. It doesn't quite work for me.

There are two directly interesting scenes, one with a pair of young women, waiting for a bus. We hear pop music. They gently dance, rocking their hips back and forth as one does when only half-interested; one of the girls slowly loses interest, turns and faces the camera, slowly forming a close-up - her face filling the screen. It's a stunning shot. The face is a swirling void of lost character, loneliness and existential crisis.

The other is quite possibly the most lackadaisical rape scene I have ever seen; even the worst human conflation of sex and power is not immune to the film's cold dispassion. It's shot from a distance, our physical interpretation of the rapist and victim lacks expressive power. Why is it distant? Are we supposed to be in the moment, or are the writhing bodies merely vessels for a pitiless, crude journey?

Here Then, is an interminable, frustrating film about the characters inability to rise beyond their cruel celebrity delusions. The more I think on it, the more I appreciate it for what it attempts, even if it's impossible to recommend. Is it possible for a film to depict crushing human dullness, without actually being dull? Would this dilute the film's etherial message?

Reviewer's note: The industry screening of Here, Then at the Edinburgh International Film Festival 2012 was presented in a print with a poor English subtitle translation. 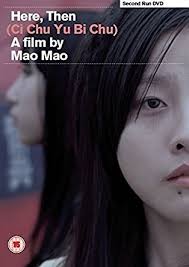 An low-key and enigmatic portrayal of the alienation, disillusionment and loss of direction that have become widespread among young people in contemporary China.