It's always sad to see likable comedians floundering in less-than-worthy vehicles, and few have had such a poor run of post-sitcom cinematic ventures as Kevin 'King Of Queens' James. His cuddly blue-collar appeal was put to good use in Paul Blart: Mall Cop - even if it wasn't actually very funny - but since then he's been stuck between undemanding family fare like Zookeeper and lowbrow Adam Sandler tripe such as I Now Pronounce You Chuck & Larry. Sandler alumni Frank Coraci's new film gives James significantly more to do than his previous work - not least physically, as he makes a good fist of the fighting scenes - but mixed messages and crass stereotyping combine with an underwhelming script to add up to a pretty lightweight experience.

Mr Voss is a jaded teacher at an inner city school whose enthusiasm has been sapped by an educational system that has been short-changing its proponents for years. When further cutbacks threaten the music department - home to one of the few teachers who remains passionate about their subject, the job and the children - Voss is unwittingly saddled with the fund-raising drive, which may at least help him impress a hot biology teacher. Moonlighting as a citizenship lecturer for night-school immigrants, Voss is shocked to learn from one of his pupils that UFC fighters can earn up to £10,000 per fight - and that's just the loser. The plucky educator hatches a plan to play the punching bag in the ring purely for prize money, but his unconventional mixed martial arts career ruffles a few feathers along the way, not least among his colleagues and fellow fighters.

Essentially a comedic reworking of Joel Edgerton's storyline in Warrior - although Coraci avoids outright spoofery - the school-based scene-setting fails to muster much mirth, riffing on Cameron Diaz's Bad Teacher with Voss sleeping at his desk and generally behaving like he'd rather be elsewhere. His instantaneous switch from shamelessly selfish slacker to moral crusader is entirely implausible, despite Henry Winkler's earnest efforts as the inspiring music teacher. The drama in the school may well have noble intentions - highlighting how the powers-that-be are letting the kids and the staff down - but Voss' sub-Dead Poets Society turnaround is too hard to swallow, and his eventual acceptance by both his colleagues and pupils feels undeserved.

There are also a few uncomfortable underlying notions being communicated; parents may not appreciate their kids being shown how lucrative and relatively safe the business of fisticuffs can be, or being told that they should respect adults who're basically abusing their own loser status at the expense of genuine athletes in a sport that requires a level of dedication the film mostly glosses over. The fighting is a little intense for the 12A certificate, running the risk of glamorising this level of physical punishment to the target teenage audience.

Things perk up somewhat with the arrival of excitable UFC legend Bas Rutten, whose willingness to go over-the-top and round the bend proves infectious, coming on like an overgrown puppy dog. It's a mystery why he's languishing at the bottom of the credits (way beneath the barely-cameoing Joe Rogan), but on this evidence he may well have a future in light-hearted fare like this. His ethnically stereotyped classmates are less amusing, the usual selection of linguistically challenged foreigners falling flat, while Salma Hayek turns on the cliched Hispanic sauce but at least gets to show her fun side after failing to convince as a villainess in Savages.

Like this year's under-appreciated Goon, Here Comes The Boom actually makes for a better sports flick than a comedy: there some truly bone-crunching bouts where Coraci shows a real understanding of his subject, some nimble camerawork putting the audience right into the pugilists' places. In some ways, the action is even more visceral than it was in the deadly serious Warrior, James taking untold damage in a desperate bid for laughs that may leave a bad taste in some viewers' mouths. As with his classroom rejuvenation, his dubious success feels unbelievable; it's hard to root for him when the headway he makes is mainly through string-pulling and blind luck, while his bull-headed determination belies a basic lack of respect for the sport he's essentially exploiting. There's nothing UFC fans hate more than a fighter who won't engage the opponent or put on a show, which makes Voss' underdog heroics all the harder to buy into.

A final fight with a fearsome foe who's furious at having to battle someone so beneath him is actually a surprisingly rousing spectacle, some brilliantly-deployed body-cams capturing every brutal blow. The script's sentimental side inevitably spills over in predictably sickening fashion, but for the most part the film ends on a sweet and satisfying note, but it's still too little, too late; the bloated run-time and echoing dearth of laughs are impossible to ignore. James really needs to pick his future projects with more care, as he's more than capable of carrying something like this, even without Sandler's more commercially viable support; hopefully his every-man charm will win through in whatever he does next. 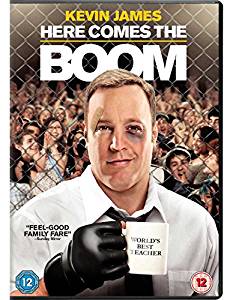 A teacher takes up mixed martial arts to try and raise the money to save extra curricular activities at his school.