None of the characters in Heart have anything going for them. Except selfishness.

Gary (Christopher Eccleston) is so insecure of his wife's affections, he almost kills himself with jealousy. She's having an affair with a writer (Rhys Ifans) and lying about it. Gary mows the lawn like he wants to murder the grass and has a heart attack. She stops tearing her lover's clothes off for a second and goes to the hospital. Nice of her.

Heart transplants have always been a source of invention for those who imagine that body parts have personalities of their own. In this case, the mother (Saskia Reeves) of the donor stalks the recipient (Gary), as if all she wants is to stick her face in his chest and hear that beat. Meanwhile, Cilla Black is singing Anyone Who Had A Heart on the soundtrack. It makes you want to crawl into a bucket.

Gary's marriage is all to bits. Saskia's dotty. And the wife (Kate Hardie) tells her boyfriend, after the transplant has been successful, "I wanted to lie beside a relatively healthy human being. You're not needed any more." He doesn't take it well.

The movie lives in dreamland and ends in nightmare. The heart thing is an excuse to intensify emotions. No one escapes the wrath of screenscribe Jimmy McGovern. He sees the devil in every detail. This would be laughable if it wasn't so serious. Eccleston rages like Pamplona. Reeves makes herself look drab (not easy), as if beauty can't suffer enough. Hardie plays hard and Ifans is more physical than he was in Notting Hill. At least, he's not wearing those dreadful underpants. 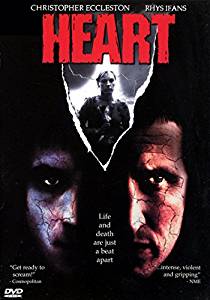 The mum of a heart donor stalks the recipient.