Gerard Barett's low-budget drama is marked out by raw performances and a strong empathy for its characters that help buoy up its downbeat subject matter.

Jack Reynor plays John, a young Irishman who - despite being only in the early years of adulthood himself is working graveyard hours in a taxi while attempting to be a parental figure to his alcoholic mum Jean (Toni Colette), his respite provided by banter with his young mate Shane (Will Poulter), who also has his own issues with responsibility.

Barett economically captures the essence of John's life, from the down-at-heel home his shares with his mum, marked out by the mountain of dishes in the sink, to a recurring snippet of voice over - "It's been a long night. Had a few difficult points. Worked a lot of hours." - suggesting the looping repetitiveness of his existence.

In sharp contrast to the mundanity of his daily grind comes the unpredictability of his mother, one moment little more than a comatose lump on the doorstep, the next a screaming banshee. Most heartbreaking of all, we see her in the moments she fully connects with her son, as when she dances - wine glass in hand - to Soft Cell's Tainted Love, while he looks on, able to relax in the moment even as he knows it won't last. Colette's performance flares into the anger and desperation of addiction but also reflects the shame and sadness that are its erratic bedfellows. Reynor, who won an acting special jury prize at Sundance, is a match for her, swinging John from stoic endurance to near breakdown without over-emphasising either. Poulter - his Irish accent impressive - also makes the most of the character that is torn between the boyhood offered by a PlayStation and doting mother and the responsibility of manhood he has already rushed headlong into.

Beyond the characters, there is a plot driver - a decision John faces about how to make cash in order to get his mum into rehab, if, in fact, he can persuade her even to go. The device - involving a minor character - feels like an uncalled for taxi, picking up the characters and transporting them somewhere narratively, when its their emotional journey that holds the interest. A subplot involving John's Down syndrome brother Kit (Harry Nagle), while making for an emotionally lifting shared moment in a car, also feels too much like an add-on, brought in to try to explain Jean's predicament in some way when, as anyone who has ever known an alcoholic will tell you, the reasons are generally multiple and complex.

But even if the story doesn't quite manage to go the distance, Barett's grip on the mood is unshakeable. 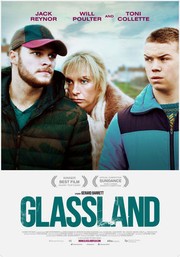 A young cab driver tries to save his mum from alcoholism.