Ghostbusters is a beautifully entertaining postmodern special effects comedy with a little something for everyone; a ridiculous idea spun into a film that skilfully mixes genuine laughs with genuine frights and chills. It's a comedy with sleight of hand - it shows you one atmospheric moment and sucker-punches a laugh at another a couple of seconds later. It left me grinning like a loon at wonderful quotable dialogue throughout.

Three unemployed parapsychologists decide to go into business for themselves performing "professional paranormal investigations and eliminations". All the while, ghost sightings and unexplained paranormal phenomena are rapidly reaching "Biblical proportions!" This is explained succinctly by Egon Spengler (Harold Ramis), with "A Twinkie thirty-five feet long weighing approximately six hundred pounds".

The three main characters illustrate three ways of not using science for the benefit of mankind. Peter Venkman (A delightfully droll Bill Murray) uses it as a way to pick up sexy young women, as in the wickedly funny electro-shock treatment scene. Ray Stantz (Dan Aykroyd) plunges into science as a substitute for anything else in life, and Egon uses it to avoid other people. The three characters shouldn't work together, but they do, with Bill Murray getting the most succulent sarcasm. Ray & Egon share the exposition and cheerfully hilarious technobabble that would make Star Trek cry itself to sleep.

The screenplay was written by Aykroyd and Ramis and it sparkles with cleverness and wit, although the funniest moments scream free-spirited ad-libbing. Despite all this, the conceit is relatively straightforward. The movie starts off in cold reality, takes you step by step into the fantastic, and becomes genuinely ridiculous without feeling schizophrenic or hackneyed. Sure, there are moments where you roll your eyes and groan, but it's just part of the charm. Sigourney Weaver, in one of her most threateningly erotic roles, is an effective foil for Murray's sardonic skill. Characters bounce off one another, and there's a certain restrained lunacy involved, in that it plays like a university comedy revue with a high visual effects quota.

Ghostbusters' pre-digital effects are a marvel; large sets, destructible building mock-ups, matte-paintings, animation and optical printing. Take the scene where the busters are trying to zap the green ghost in the hotel - look at the physical effects, the fire, the strobe lighting and the way it all knits together. The proton whips lash over the place blasting everything but the ghost! With all that special effects razzmatazz, it's astonishing how well the characters and delicate situation comedy hold up. The effects serve the (admittedly thin) story but never dominate the actors' deadpanning. And besides, I'd never take away anyone's first viewing of the mean and hilarious spoof of Godzilla for anything.

I still find this film rather scary. Why? Because it's taken seriously! The helldogs are a terrifying creation, the transforming library ghost frightened millions of children, and the unearthly voice of Zuul, eep! Elmer Bernstein's score is creepy stuff. Not music you'd want to play on your car stereo at the dead of night. Ghostbusters may also have been the first modern family film that dealt with an apocalypse - "The End Of The World!" bellows Egon - as a central element.

And of course, with its ending - which I will not spoil - it must have taken guts to talk to the studio and convince them it was a good idea. Thankfully, sense and madness won out and thus began the greatest horror comedy ever made. 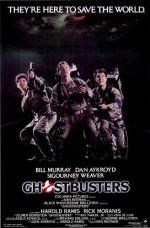 Who ya gonna call?

Who ya gonna call?