Unlike the cynicism of Bad Santa, this is the real McTinsel. Santa (Jim Broadbent) is a white bearded fuddy duddy in the true tradition. None of your Northern hemisphere funny accented yo-ho-hos. He's English. He could be grand-dad playing silly billies after a boozy Xmas lunch.

Of course, as you would expect, only the kid believes. Tom (Kit Connor) is old enough to know better but he has issues of his own, mainly to do with his dad (Rafe Spall), who is divorced from Mum and in prison.

When Tom finds Santa hiding in the garage after his sleigh crash landed and the reindeer escaped, he knows exactly who he is. Mum thinks he's a dirty old man and has him arrested.

Meanwhile Dad has served his term and is out. He gangs up with Tom secretly because Mum's being Mum, although her new husband is cool about it, and they go back into chokey to help Santa escape and so save Christmas.

Well, woop! Although the plot is perfectly placed for that mince pied glowworm feel, it becomes tangled in its own loose ends. Spall misses the panto train and takes a reality bus, which is slow and dull. Connor plays straight extremely well and Broadbent saves the film from itself with red nosed conviction.

The prisoners have potential as comic support but are not given enough to do. There are missed opportunities and unnecessary subplots - an only child's response to a broken marriage, for example - which complicate the core message.

Writer/director Christopher Smith should read and learn from Dr Seuss. Simplicity and Santa are blood brothers. 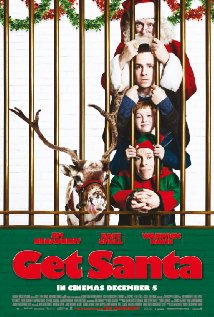 Santa Claus is on the run.