As Roland Emmerich's Stonewall continues to receive a critcal clobbering around the globe, this altogether more sedate - one might say to a fault - story of a struggle for gay equality, is making its way around the festival circuit.

While it's great to see lesbian stories finally making inroads into the mainstream - with Julianne Moore a particular proponent thanks to this and The Kids Are All Right, and with Jamie Babbit's anarchic Addicted To Fresno and Paul Weitz's enjoyably acidic Grandma coming soon - this film still feels a day late and a dollar short. The title also proved a head-scratcher for every non-native English speaking journalist I talked to at San Sebastian Film Festival, where it featured in competition. I admit, had to look it up myself to check, and here the term is referring to the New Jersey county legislators – all male, of course – also branded freeholders, who ultimately hold all the power over the central character.

Working from a script by Philadelphia scribe Ron Nyswaner, which hits many similar emotional beats, Peter Sollet dramatises the story of Laurel Hester (Moore), a gay New Jersey cop who, when she was diagnosed with terminal lung cancer, came out of the closet at work to try to secure pension rights for her legal domestic partner Stacie Andree (Elliot Page).

The story elements - small fry takes on the system big fish, love endures in face of death - come with the distinct whiff of Oscar bait and the film is anchored in strong performances by the two leads with Michael Shannon in fine support as Hester's beat partner Dane Wells.

Steve Carrell is unfortunately stunt cast as the gay lobbyist who swoops in to try to save the day. When you see him you immediately expect him to be funny - and it throws you out of the film. Plus his OTT performance is so at odds with the staid aspects of the rest of the drama that he feels parachuted in from Planet Camp.

Freeheld is at its best when it showcases the talents of Moore and Page, particularly in the early stages of their relationship, where the heat of chemistry rolls off them in waves. Even later, when they are almost crowded out of their own movie, the relationship still burns bright when it is allowed to. But as the wall of masculinity that they face in trying to get justice is considered, Sollett relegates them too much, turning outward to us, trying to pat us on the back for how far we've come since these dinosaurs of the, er, mid-2000s.

The beats of Hester's conflict with the freeholders are hit but they lack emotional depth, with Nyswaner relying too much on the simple contrast between her frailty and their out-of-touch moralising. The result is that the inner struggle of Hester as she comes out and Wells' journey to acceptance ring far more resonantly than the incredible battle Hester and Andree wage against prejudice and bureaucracy – as though Hester's weaknesses are somehow more important than the weaknesses of society. The point has been missed by a mile. 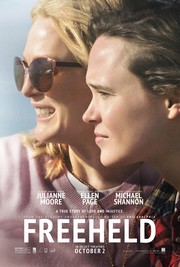 True story of a terminally ill gay cop who fought for the rights of her partner to receive her pension.