Tomas (Johannes Kuhnke) and Ebba (Lisa Loven Kongsli) are a middle-class Swedish couple whose marriage is firmly on the slide from the hot happiness-drenched baby-making years to the cooler territory of Work Comes First - Ebba wastes little time in pointing out to someone she meets Tomas is working too much and now has "five days to focus on his family", including kids Vera and Harry.

Transporting them to the snowy reaches of the Alps, Ruben Östlund - who has always had an interest in the chillier waters of satire - presents us with variations on the theme of Avalanche Metaphor, suggesting the couple have tamped down their emotions so much that things threaten to crumble with a bang. Acting as a catalyst for implosion is a moment when, as the family are enjoying an open-air meal, an avalanche is deliberately triggered on the slopes and the snow rushes so close to the restaurant that the diners panic. Ebba scoops her children to her while Tomas opts for instinctive flight, his urge to run compounded by the fact that rather than grab one of the children, he takes his smartphone instead. The rest of the film explores the aftermath.

Östlund has a real eye for the force of nature, his symphonic interlude shots of the 'running of the slopes', from canons to dislodge loose snow to the buzzing back and forth of ploughs - ironically overlaid by a crescendo point of Vivaldi's Summer movement frp, The Four Seasons - offering much-needed energy to off-set the looping conversations elsewhere. It is the theatricality of the couple's heart-to-heart conversations that is the film's weakest link. Their willingness to bare their souls to other holidaymakers while being unable to talk openly when alone feels forced, and Östlund simply doesn't give enough psychological depth to the characters to make you care enough about their predicament. When Joanna Hogg (Exhibition, Unrelated) directs this kind of thing, you feel the horror of the situations but here the couple's tension merely becomes irritating after a while.

The real pleasures of Östlund's film lie in the subsidiary characters. He gets excellent performances from his child actors Clara and Vincent Wettergren, no doubt exploiting the fact they are real-life siblings to capture the way that tensions trickle down in families - their reactions vacillating between boredom, anger and dread. A subplot involving divorcee Mats (played by Kristofer Hivju, sporting the best cinematic beard since Blue Ruin) and his much-younger girlfriend Fanni (Fanni Metelius), also feels more realistic than the main event, with a middle-of-the-night, slighty tipsy argument between them triggered by Matts' sympathy for Tomas, the film's comedy highlight. 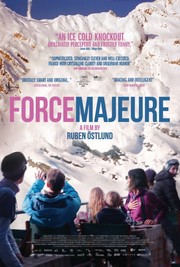 A family find themselves tearing apart after an avalanche on a skiing holiday.