Mixing genres is like dressing up. It can be fun. A serial killer cop mystery turns into a demonic shocker in the way that The Devil's Advocate had an ambitious young Southern lawyer come to New York and work for... Satan.

Nicholas Kazan's screenplay is taut, particularly at the start. Denzel Washington, as Detective John Hobbes, has a touch-me-I'm-golden kind of charm. He stands for law and order. He doesn't take bribes. He quit smoking. He's not messing with girls. He cares about his kid nephew. He's Mr Squeaky.

His partner is John Goodman, affectionately known as Jonesy. He wouldn't be in the force if it wasn't for Hollywood. He'd be in the gym, losing a couple of hundred pounds. Jonesy and Hobbesy are not the terrors of the precinct. They do their job, go home, snap a cold one, catch the game on cable, stroke the cat (if there is one).

Edgar Reese (Elias Koteas) has it in for Hobbes. He's about to choke in the chamber for a multiple murder rap. He wants the cop who pulled him in to be there, witness the final moments. He has a message for him: don't think you've seen the last of me, I'm on to you, I won't let go. And then he dies.

Things start to happen. A fresh spate of killings begins, with identifiable trade marks and no apparent logic. Hobbes does research on a respected cop who shot himself in the woods 20 years earlier and talks to his daughter (Embeth Davidtz), who is seriously nervous. "They want the fall of civilisation," she says, meaning the forces of evil. Hobbes doesn't laugh. He's beginning to sense the presence of Edgar Reese.

An ambitious plot implodes in the detail. Supernatural behaviour has to make sense, even if the whole thing's off the wall. Kazan's script takes a bunch of liberties with credulity and leaves his options hanging. Donald Sutherland, as Hobbes' boss, adds gravitas, but little else, while Goodman adds weight to the furniture, rather than the film. Fallen has a good beginning, an intriguing middle and a dodgy end. Washington needs to be stretched. He's growing fat on same-old. He needs to go back to Devil In A Blue Dress. He needs lean meat. 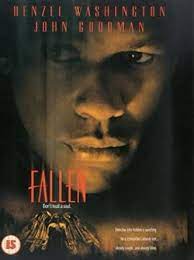 A cop investigates after a spate of killings similar to those committed by a man whose execution he has witnessed.