Fading Gigolo is one of those films where a surface level reading of the film's concept triggers raised eyebrows. John Turturro and Woody Allen play an ageing male prostitute and his even older pimp respectively, in a modern day New York love story? Seriously?

In an interview with The Guardian recently, writer/director and star John Turturro argued that his more sophisticated intention was to put a new spin on the sex worker in film, as well as showing women in a different light when it came to the concept of paying a man for sex: “Well, I think there are positive things about what sex workers do,” Turturro said, “I know and consulted people who have been in that world, and it’s interesting on a human level that people sometimes go to these people for reasons beyond just sexual contact – maybe they're looking for solace, or other things, and sometimes they are truly helped.”

John Turturro plays mild-mannered but financially struggling (though this being a New York movie, he can somehow afford a great apartment) single florist Fioravante. In between his infrequent shifts at the florists, where he displays an impressive skill for intricate bouquets, he spends his time hanging out at the local used bookstore which is presided over by the ultra-neurotic Murray (Allen).

Murray has a somewhat leftfield idea to give his friend a financial, and maybe spiritual, boost. Murray has heard, through his dermatologist, that there is money to be made satisfying single - and not so single - women in New York. Murray offers the baffled Fioravante a deal: Murray will hook him up with upper crust New York clients, Fioravante will bring the satisfaction. Murray regales the dubious florist with claims that he has as-yet-undiscovered lashings of sex appeal that will ensnare their clients and lead to repeat business. Fioravante’s first client turns out to be Murray’s dermatologist (Sharon Stone), who, in the absence of rich hubby, is working her way up to a threesome with girlfriend Selima (Sofia Vergara) who also experiences Fioravante’s talents.

To both their astonishment, their plan is wildly successful, and the dollars start rolling in. But this attracts the attention of neighbourhood patrol officer Dovi (Liev Schreiber) who resents the fact that his childhood crush, Hasidic Jew widow Avigal (Vanessa Paradis), is also a new client of Fioravante (but for massage and conversations as opposed to sex). Despite her strict religious upbringing and grieving, Fioranvante and Avigal develop a burgeoning attraction, as his attentions toward her begin to awaken the widow from her self-imposed isolation.

The problem with Turturro’s film is that good intentions and an interesting (though weird) core idea are not matched by the execution, as despite having a kind and sweet heart, with heaps of affection for its characters and the Big Apple, Fading Gigolo just isn't funny or sharp enough. The film feels like it owes something of an aesthetic and tonal debt to its co-star Woody Allen, being a New York tale of nebbish, shy and generally awkward characters getting involved in all kind of scrapes in and around the Jewish community. But it has none of the zingy dialogue or observational smarts of Allen’s past glories. Many of the gags seem just one step away from banana skin slips, including a painful third act which bizarrely sees Allen’s character abducted by the local Hasidic police patrol to face a hasty convened Jewish community court (isn’t this a serious crime way outside their jurisdiction?)

Even Turturro doesn’t feel fully invested in his role, seemingly ceding all the energy to Allen, who isn't even the main character. Maybe this was intentional, as Fioravante’s appeal appears to rest at least in part on his mysteriousness and distance. As for Allen, his character could have been put together with cutting room floor outtakes from any one of his own films. These awkward on-the-nose gag segments, plus the plain weird concept, keep interfering with the more profound observations the film is trying to make about the way people value sex and intimacy, especially those in closed communities or mindsets. It also doesn't help that Avigal and Fioravante’s relationship, through the writing and performances, seems unconvincing and lacking in spark. And for a film that is supposed to be about a variety of intimate relationships in New York today, that is a fatal flaw. 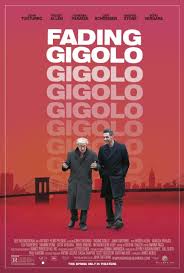