Only the French could intellectualise failure and make a serious film about a man who hates life.

Based on Michel Houellebecq's controversial novel, Philippe Harel stars and directs. He uses a voice-over narrative to tell a story that is without hope, or warmth.

The protagonist, who refers to himself as Our Hero, has a pointless bureaucratic job that bores him rigid. "On a normal weekend, I saw no one," he explains. His negativity reflects in his body language and he chain smokes, probably because he knows how much it annoys people, shambling around his apartment in a dressing gown doing nothing: "Having lived so little, I imagined I would never die."

He finds himself on the road with Raphael (Jose Garcia), a salesman from the office, whose optimism in the face of rejection disguises low self-esteem, particularly concerning the fairer sex. Our Hero has given up on women, since his wife walked out. Raphael, on the other hand, is a 29-year-old virgin, whose nervous bonhomie proves an instant turn-off. The older man suggests there is only one way to dominate a woman and that is to kill her. He buys a carving knife at the supermarket and gives it to Raphael.

Sitting through this film is an ordeal and yet its uncompromising look at depression has an honesty that deserves respect. Also, you cannot help admiring Our Hero's attitude towards the answerphone. "Wrong number," his recorded voice informs the caller. "Leave a message." 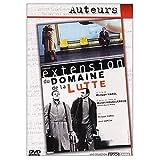 Bleak look at life for single men in the modern world.