The story of an orphan child, brought up as a prince in ancient Egypt, who is banished to become a lowly goatherd before leading the Hebrew slaves across the Red Sea to the promised land is one of The Old Testament's iconic fables.

In the hands of Ridley (Gladiator) Scott throw away The Bible and let's look at this thing afresh. The weedy, sickly Pharaoh (John Turturro) prefers Moses (Christian Bale) to his real progeny Ramses (Joel Edgerton) who talks tough ("Get it done faster, or do I have to kill someone?") to hide a weak character. After the old man pops his clogs, Ram does a Chairman Mao on Mo and banishes him to the outer wilderness.

Mo doesn't die as expected but is taken in by an isolated hill farmer and his family, which includes a daughter who looks like an Italian film star. Result: Mo marries the film star, grows a beard, moves into a hovel, has kids and looks after goats.

Meanwhile, in Egypt, God comes to the aid of "these conniving, competitive people" (Ram's description of the Hebrews) and does His plague trick - frogs, hailstones, locusts, crocodiles (eh?) and death of the first born, which has the effect of an ISIS-style massacre on the ruling class.

God talks to Mo in the form of a naked young boy (ooops!). There is a burning bush that looks like someone's Gaz cooker fell over, but no climb up the mountain to meet Big Daddy and be given The Ten Commandments.

In the recent risible Noah, rock monsters, straight out of a Marvel comic, built the Ark. Exodus is not quite as stupid although the Red Sea escape, seen as a tidal phenomenon, is no more absurd than Cecil B DeMille's literal interpretation.

The film begins with vast panoramic scenes of Egypt at its productive height and ends with a big wave. The central period, as Mo settles into his role as peasant farmer is uber long and flat boring. Despite the scriptwriters' attempt to keep the language teen friendly ("Nice of you to come," Mo tells the naked boy God), the plot is confusing.

As for acting, read the label: Not Wanted On Voyage. 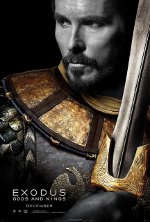 The story of Moses, the adopted orphan who becomes a prince of Egypt and leads the Hebrew slaves to freedom