As Joseph Heller wrote: "Just because you're paranoid doesn't mean they aren't after you."

And the question in Visar Morina's tense and uneasy second feature is to what degree both these elements are at play in the life of Xhafer (Misel Maticevic, who has the look of a young Nathan Fillion). A Kosovan migrant, he lives in Germany with his wife Nora (Sandra Hüller) and three kids while working in a high pressure job as a chemical engineer, his workplace a warren-like, strip-lit place of nightmares where all the men walk around in a permanent sweat. The sort of environment that would breed stress in anyone, as the script, co-written by Ulrich Köhler will go on to show. But for Xhafer, the situation is exacerbated by latent - even if, possibly, accidental - low-level racism, such as the way people repeatedly mislabel him as Croatian.

There's no doubting the reality of the rat that Xhafer finds hanging on his front gate, though - an animal that those in his workplace are aware he has a phobia of. It is this that begins what will come a spiral of obsession and paranoia for Xhafer as he starts to take things such as being left out of communal office emails by his offhand colleague Urs (Rainer Bock) intensely personally, despite his wife pointing out that it may be nothing to do with his race, but rather the fact that they "dislike him" as a person. This lack of sympathy on the home front encourages cracks to form there as well, as Morina invites us to consider to what degree the chip on Xhafer's shoulder is fuelling the problem, even as he also points to how, slights that may individually seem small, can build to a barrage in the wrong environment.

Morina generates a similar atmosphere to that of the films of Ruben Östlund, prying at the cracks in the male psyche, with his drama leaning more into atmosphere than narrative, which, along with the two-hour running time, requires some patience from the viewer. The broody tension - masterfully played by Maticevic, whose every move speaks to the internal conflict of a man who believes men are not supposed feel these sorts of emotions - is stoked by the tappings and sudden more strident moments of Benedikt Schiefer's score. There's also a sense of Xhafer not being so dissimilar from those lab rats he loathes, whether its when he is scurrying along the corridors of his office or trapped in the airless gloom of his family home. It seems we, like him, are part of the experiment, as Morina asks us to judge where our sympathies lie and what, in turn, that might reveal about us. 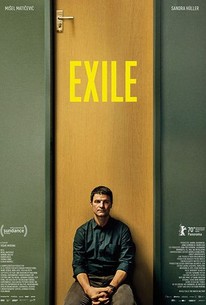 A chemical engineer feeling discriminated against and bullied at work plunges into an identity crisis.