Those who watch last year's overlong and overstuffed The Prom with increasingly sinking hearts, will be pleased to hear that this British charmer, packed with candy-coloured energy and a dash of stringent comedy covers similar themes and emotional territory with a lot more panache. Like The Prom, it comes with its own real-life backstory - and the real Jamie Campbell was on-hand to bring sparkle to its recent premiere at Edinburgh International Film Festival, a shame then that the film was embargoed meaning nobody could, in fact, talk about it at the time.

To recap, the Bishop Auckland teenager found unexpected fame in BBC3 documentary Jamie: Drag Queen at 16, a story that would go on to be adapted by The Feeling's Dan Gillespie Sells, lyricist Tom MacRae and choreographer/director Jonathan Butterell into a hit musical. Now the tale of the teenager who wanted to wear a dress to his school prom, among other things, has been brought to the big screen (and Amazon Prime) in a film that marks Buterell's debut behind the camera and which shows he's more than capable of opening the story out from the stage, even if he can't completely shake off its origins.

Creative licence has been taken with Jamie's story, of course, but the essence of it - and particularly the emotional beats - have a strong ring of truth. At 16, Jamie (newcomer Max Harwood, who could have been born to play this role) is more than happy to be gay and has been out of the closet forever, after all, he needs that space for the fabulous fashion items he keeps snapping up, not least the tremendous pair of red high heels his supportive and proud mum Margaret (Sarah Lancashire) has bought him for his birthday. His withering wit means he takes no prisoners in the classroom, so although there is some homophobia he mostly floats above it - sparkly and spiky in equal measure.

Like every teenager, of course, life isn't without its difficulties. Jamie may dream of becoming a drag queen - something that old hand Hugo (Richard E Grant, having the time of his life) is happy to help with - but he's also struggling with his largely absent father (Ralph Ineson). His dad hasn't just divorced his mum but has spectacularly failed to come to terms with his son's sexual orientation, with both the older and younger man unaware of how much work Margaret has been doing to try to square the circle. And so the stage is set for just enough emotional undertow without the film getting bogged down in any sort of serious gloom.

Butterell handles the ebb and flow of emotions well, there are fabulously bright and breezy big numbers and some quieter moments to boot, with the sweet friendship between Jamie and his Muslim mate Pritti (Lauren Patel) also adding depth. The nod to the homophobia and grief faced by Hugo's generation in the Eighties is also slotted gracefully into the story, a reminder of those who fought long and hard so that Jamie's generation could have their fairy-tale ending. 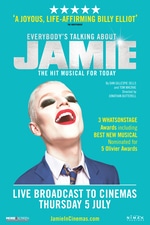 A teenager overcomes prejudice to fulfil his ambition of becoming a drag queen.