The success of Eternal Beauty rests firmly on the central performance by Sally Hawkins as Jane, a woman who is a paranoid schizophrenic. She proved with her non-verbal central character in The Shape Of Water just how well she can convey emotions physically, showing the nervous energy of Jane on what might be considered her 'good' and 'bad' days without slipping into repetition or caricature. There's a volatility and a sweetness at play in what is, at heart, a character study and writer/director Craig Roberts strikes an impressive balance of mood, allowing some humour to seep into proceedings without ever making light of Jane's condition or suggesting easy resolution.

We see the world from Jane's perspective, often in non-linear fashion - including sensitively worked-in flashbacks to her disastrous wedding day (when she is played by Morfydd Clark), which occurred at about the time her mental health began to spiral down. Now, she is prone to hearing voices - sometimes at the end of a red telephone and colour is used throughout the design of the film, particular reds with their edge of danger and blue, seemingly Jane's favourite colour, but which holds memories both good and bad. The rest of her family is largely a study of dysfunction, from her harridan mother Vivian (Penelope Wilton, gleefully seizing the bad guy role) to her troubled younger sister Nicola (Billie Piper) to her sympathetic older sibling Alice (Alice Lowe).

Roberts, who people will probably remember best from his breakout role in Richard Ayoade's Submarine, has a confidence behind the camera and with the material, which he has said draws on the experiences of a member of his own family, who had similar mental health challenges. He uses odd camera angles and trickery - such as a moment when it swings round, day to night, as she picks at the wallpaper when off her medication - to immerse us fully in Jane's mental state, the sense of never quite being able to sit easily mirroring much of what Jane feels about the world.

This immersion is at its best in a bittersweet relationship that builds between Jane and Mike (David Thewlis), a man she meets at the doctor's surgery and who is also struggling with his own, unspecified, mental health problems. Here cinematographer Kit Fraser - who proved he knows how to unsettle with his camerawork in horror film Under The Shadow a couple of years ago - also shows an aptitude for suggesting happier, more care-free emotions, as the pair embark on an unlikely whirlwind romance.

The film's biggest flaw lies, paradoxically, in the success of Hawkins portrayal and the nuance of her character, because, by comparison, the other family members feel rather one note, although this may in itself be intended to reflect Jane's perspective of the world. Scenes with the family together - including a delightfully odd Christmas visit - sometimes bloom in unexpected emotional ways but not everything convinces - particularly her nephew's apparent full deadpan acceptance of his aunt's issues and I could have also lived without what now feels, in these sorts of films, like an obligatory reference to electric shock therapy. Still, if not everything works all of the time, there's a fearlessness both about the central character and the direction that proves compelling to the last. 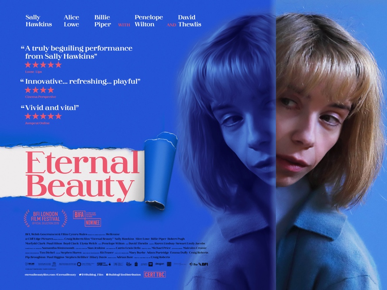 A schizophrenic woman finds things change when she embarks on a romance with a failed musician.