To take the concept of a video game and incorporate it into a futuristic world domination alien monster movie may have a comic book feel to it but this is a Tom Cruise 3-D action flick that is as stupid as it is expensive.

Steal the idea of resurrection, with pre-death knowledge intact, from Source Code and add it to a carbon copy of World War Z, using metallic octopuses instead of zombies and you are half way there. The other half is gobbledegook, concerning a hunt for the mother lode.

Major William Cage (Cruise) is an ad man, not a soldier, who is demoted to private and added to a squad of misfits waiting to be dropped into France from London, D-Day style, as frontline troops in the final battle against the aliens. He and his fellow ragbags wear Robocop gear which makes movement clunky.

Cage gets killed over and over and comes back to the same place to start again. Bor-ing! He knows what's going to happen but unsurprisingly is unable to convince the others that all they can expect is to be slaughtered. He meets Rita, The Angel of Verdun (Emily Blunt), who understands what is going on because it's happened to her and they join forces in an attempt to destroy the central intelligence, a jelly fish with lights, that controls the CGI tendril-slashing terror machines and so save the world.

Funded by enough money to pay the Pentagon for a week in Afghanistan, the film has to look amazing, right? Not particularly. The creatures are black Medusaesque snakey things that move so fast you cannot register their shape or size.

Cruise gives it his best, as he always does, but cannot fight the script. Blunt looks cool in an androgynous way and towers over him. What's this? Feminism rules, OK?

By the end it doesn't matter because your brain's dead and won't reboot. 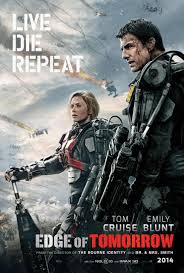 A soldier fighting a war with aliens finds himself caught in a time loop of his last day in the battle and despite being killed over and over resurrects to save the world with the help of a tall girl in a leotard.