Included, along with Baby and Lambert & Co, as an extra on Criterion's new release of Bob Dylan: Don't Look Back, this is DA Pennebaker's first film - and it's a gem. On his website, he says: "I wanted to make a film about this filthy, noisy train and it’s packed-in passengers that would look beautiful, like John Sloan’s New York City paintings." He certainly captures both the movement of the Duke Ellington piece that provides the soundtrack and something of the expressive energy and detailing of Sloan's work.

Ellington's big band mimic the sounds of a train picking up pace before speeding along and Pennebaker's film beautifully reflects that, beginning at daybreak with the fiery red of a skyline, the city's architecture shown as shadows that cut across it before we get on the train and see those inside. Shot on Kodachrome and employing lenses and filters, the colours, from the hot oranges at the start to deep blues later on, are eye-popping, while the editing ensures the kinetic action flows from inside the train to the exterior. There is a dialogue between the two, not least in the reflected images on the train windows as we are looking at the world flash past.

Pennebaker makes the intricacies of New York's architecture feel like a perfect match for the complexities of Ellington's music and generates a tangible sense of the scale of the city's buildings, sending his camera into a dizzy spin and climaxing with an abstract kaleidocscope of images so that his film is simultaneously a piece of poetry in motion and an evocative documentary snapshot of the city at that time. 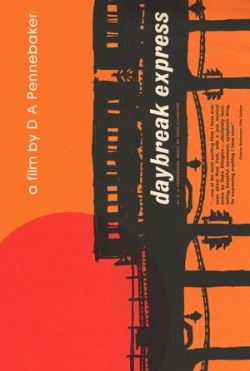 A subway commute in New York.