Set in an epic landscape contrasting barren and sulphurous wastelands with deserted towns and lushly verdant plains and marshes, Crumbs tells the surreal story of a quest involving witches, masked warriors, second generation Nazis, and Father Christmas. Candy (Daniel Tadesse) scavenges relics of past civilisations from a dangerously desolate wilderness where he lives in fear of bigger (human) predators. But while he is small in stature, Candy dreams big.

When the rundown bowling alley in which he lives with his sweetheart Birdy (Selam Tesfaye) suddenly splutters back into life on its own, Candy finds that he has to overcome his fears about the outside world and put his dreams into action. Birdy believes that that the strange events at the bowling alley are a signal from the spaceship in the sky, which has long been dormant but now appears to be waking up - for what purpose, no one knows.

To reassure Birdy, Candy says that he will consult a witch to find out what is going on in the spaceship. What he does not tell her is that inside the bowling alley's newly-reactivated ball return mechanism, he has seen Father Christmas in an abandoned building - Candy wants the witch to tell him where Father Christmas is so that he can ask the mythical figure to grant his most fervent wish, which he believes ties his destiny to that of the spaceship.

On his journey Candy carries or acquires artefacts from a 'pre-apocalypse' era that look suspiciously like mass-produced consumer items from the 20th century - his sword is made by the legendary Carrefour and his 'protective amulet' is a Ninja Turtle figurine. Symbols from this ancient era are reinterpreted (Michael Jordan is worshiped as a God) - or perhaps better described as repurposed - in this post-apocalyptic landscape. People set great store in objects and subsequently imbue them with talismanic status, but as Candy's quest progresses it is noticeable that he either misplaces these talismans or has them taken from him - he must ultimately find bravery within himself rather than relying on props.

Crumbs wears its special effects with great subtlety - the spaceship hovering in the misty distance both pertains to Candy's world but is also otherworldly, and the film's technical élan and sophistication belie its low budget. Israel Seoane's widescreen cinematography captures some moments of startling beauty in the Ethiopian vistas - Candy passes through a range of different landscapes - and the predominant colour palette of browns and soft greens supports writer-director Miguel Llansó's composition of his epic sci-fi love story as both realist and lyrical.

At the same time there is also much humour and playfulness in Crumbs, whether the close-ups of Tadesse's intense gaze recalling the stand-offs in Spaghetti Westerns or the surrealism of juxtapositions that manage to mix Afrofuturism with Spanish costumbrismo (a concern with 'local colour' that can either be satirical or romanticising). Alongside Androids Dream, Crumbs was the centrepiece of the D'A Festival's (Im)Possible Futures strand, a collection of films representing low-fi (or realist) sci-fi - in Llansó's case, he manages to combine the poetic sci-fi of Andrei Tarkovsky with the surrealism and dark humour of his fellow countrymen such as Luis Buñuel, Luis García Berlanga, or more recently Sergio Caballero.

Crumbs is a sci-fi adventure and a love story imaginatively conveyed on an epic scale, with no small amount of flair. If Candy discovers that he is not 'special' in the way he has long-believed, and has to downscale his big dreams, his and Birdy's lives are nonetheless captured with warmth and beauty - the reality available to our anti-hero is not as bad as he initially thinks. Recommended. 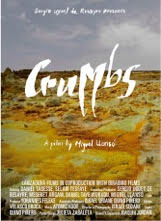 When the spaceship in the sky begins to reactivate, Candy sets off on a quest across a post- apocalyptic Ethiopian landscape to ask Father Christmas to grant him his heart's desire.