Martial arts is a discipline. Hollywood sees it as an extension to violent cop movies. Ang Lee, in this exceptionally beautiful film, uses it to choreograph action sequences that take your breath away.

Shot in China over a five-month period, the visual sweep has an epic quality and the story is rich in romantic symbolism.

It is the early 19th century, last years of the Qing dynasty, before the opium trade has corrupted the country. The concept of the aesthete warrior, a more spiritual version of the Japanese Samurai, is well-established. Yu Shu Lien (Michelle Yeoh), a leading female warrior, is secretly in love with the legendary, undefeated Li Mu Bai (Chow Yun-fat). After a period of meditation he confesses to being "surrounded by an endless sorrow" and decides to relinquish his 400-year-old sword, the mythical Green Dragon, and allow Yu to take it to his old tutor in Beijing.

When the Green Dragon is stolen, Yu follows its trail, bringing her to Jen (Zhang Ziyi), the teenage daughter of a magistrate, who has been taught martial skills by the notorious criminal, Jade Fox (Cheng Pei Pei).

The film is Jen's story as much as Yu's, her impending marriage to a man she does not love, her passion for the bandit, Lo (Chang Chen), and her clandestine life as a warrior of the night.

The story leaps from one pinnacle of excellence to another, exploiting the artistry of Yuen Wo Ping, the choreographer reponsible for those unforgettable gun battles in The Matrix.

The fighting, particularly between the women, has a balletic quality combined with lethal speed. Yuen's inventiveness defies gravity as the protagonists fly through the air in pursuit of each other, like Peter Pan after Olympic gymnast training.

The visual delights are matched by performances of absolute conviction. Nineteen-year-old Ziyi takes the role of tomboy to its ultimate edge, as cold steel becomes hot in her hand. Yun-fat is an imposing presence and Yeoh, who brought pedegree to 007's Tomorrow Never Dies, is magnificent.

Taiwanese director, Lee, made Sense And Sensibility, his first English language picture, in 1995. Since then, he has garnered critical honours for The Ice Storm and Ride With The Devil. Now he returns to the land of his forebears with a work of astonishing originality. 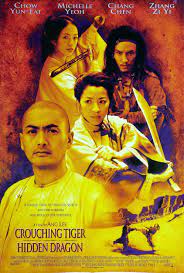